I know it’s two in the morning, and I know I have a lot of writing still to get done in the next few days, but I thought I’d share this video of Soft Cell performing “Chips on my Shoulder” on the Oxford Road Show in 1982 because who doesn’t love some synth pop in the middle of the night?

I understand that this requires some explanation. I’m currently transcribing an (amazing) interview I conducted with one of California’s top New Wave record collectors (and perhaps the biggest Marc Almond fan in the country). It inspired me to take a break and watch a few videos of the twisted and inspirational (and coked out of their fabulous minds) Mr. Almond and Mr. Ball. This video may be the coolest thing I’ve found so far. 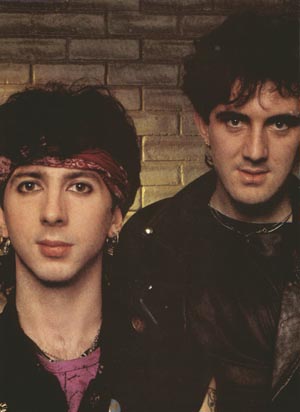 Jean Baudrillard wrote in The System of Objects that we tend to fetishize cultural objects because the moment (time and place) of creation cannot be reproduced. My interviewee (who would be as much an expert as anyone) said that nobody has ever really duplicated the sound and aesthetic that Soft Cell emitted on the “Non-Stop Erotic Cabaret” LP. Drugs did have a lot to do with the aura in question (Almond admitted as much, explicitly, in his autobiography Tainted Life), but that is neither here nor there. Now that I think about it, there really isn’t anything out there exactly like this, even three decades on, which is not only a testament to the music’s staying power, but to the permanence of a time and place in the creation of a recording. Also, for some reason, this completely happened, too. If anyone wants to start a flame war in the comments over which half of the 80’s was more interesting, be my guest.

Okay, thanks for reading, hope you enjoyed. I’m going to start posting some newer bands soon, I swear. I also swear I’m going to get these chapters done by the end of this weekend. Let’s see which promise I manage to keep.