For my non-AAG-attending readers here (and for any AAG folks who may have missed it), my colleague in the Cultural Geography Specialty Group, Emily Fekete, circulated a petition on Change.org in which her colleague Andy Shears articulated a tension that has existed among AAG members for some time. In simple terms, the conference has become way too expensive for many of its members. Here is the original petition.

I would like to continue this conversation, and make a few suggestions with my own reasoning for future conferences after Boston (2017). Regarding 2018, I initially heard Washington, DC (which made sense given AAG’s headquarters and the organizations propensity to “max out” its attendance when/where possible), but I’ve since discovered it’s going to be in New Orleans (a move in the right direction, which I’ll address later). That being said, here is my personal perspective on the issue. Feel free to use this as a case study in your own spiels about this subject.

San Francisco inspired such outbursts because it encapsulated everything that has been problematic with the AAG’s location and scheduling choices for the annual meeting for some time. While I understand that a large-scale conference during the heavy spring tourist season must require some maneuvering, putting thousands of graduate students in an exorbitantly expensive city for 4-5 days prior to when many graduate students get paid their monthly stipends is stressful. The AAG Annual Meeting is, for lack of a better term, a geographic mega-event that brings anywhere from 6,000 – 10,000 professionals, students, and their loved ones together for a week of networking and over-committing themselves. While tenured professors and professional veterans in fields like GIS and Urban Planning attend the meeting religiously, it seems like the AAG is overlooking its indispensability to graduate students like me. Getting to present your research to people from all over the world in your area of interest (as well as branching out and attending sessions outside your specific field) is paramount to beginning a career in Geography. 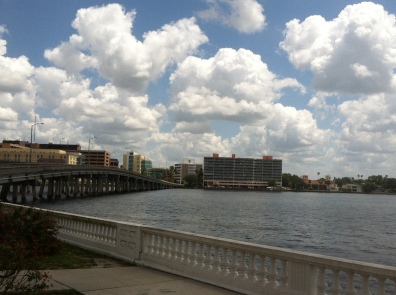 A bridge to the Davis Islands in Tampa, the morning after the 2014 conference ended.

From what I understand, the AAG considered the 2014 conference in Tampa a failure because only approximately 6,000 people attended…a measly 6,000 that allowed our sessions to end at reasonable times each evening in a fun and (relatively) accessible city that kept hotel prices affordable. As much as I love Chicago and San Francisco, Tampa was my favorite AAG meeting so far. Tampa’s relatively small (albeit growing) size made it easier to focus on the conference and partition my leisure activities. The Tampa convention center’s location (unlike that of Chicago or San Francisco) kept the AAG folks safe from the crush of morning commuters yet still adjacent to the nightlife (aided, I’ll admit, by the Tampa Bay Lightning home games scheduled that week at the St. Pete Times Forum). I understand that a lot of international geographers chose Tampa as “that one year” to skip, but a lot of geographers need to take occasional years off regardless. I knew a handful who chose to skip going to San Francisco this year, even. It wasn’t because of a misconception that people need a city with “caché” to entice them to bring their families on holiday and generate revenue. Tampa may not be the “sexiest” international city to geographers outside the US (though my TB friends would probably take exception to that), but here’s a crazy notion: we are geographers. Many of us wouldn’t be in this business if we didn’t enjoy digging up the gems that every city (yes, every city) has to offer. I could name at least 15 geographers off the top of my head who teach and work in tiny towns whose nightlife consists of the equivalent of less than one block of Ybor City.  Even coming out of Knoxville (which does have decent nightlife), I had a great time taking advantage of what Tampa had to offer, and so did many of my friends/colleagues. We also got to play Simpsons pinball and see The Dead Milkmen play, which were both awesome, but that’s neither here nor there.

As I eagerly await my reimbursement from my school for my registration fee ($155, fair for the professional Geography conference but still a hole in the wallet when you’re a grad student in 2016) and my hotel share (worth it for the proximity but still exorbitant even split among three other roommates), I’d like to put forth a few city suggestions for future AAG meetings and my reasoning for each. Shears’ petition already mentions a good handful, some of which I would enthusiastically support and others, while I’m skeptical about, I would still gladly attend:

Such a great list! I’ve yet to go to an embarrassingly high percentage of those places. Taking numerous factors (city profile and sustainability, etc.) into consideration, here are a couple that I’d like to add. 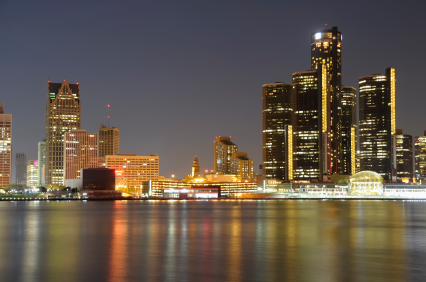 Fewer phrases bring more excitement and hope to my brain than “AAG Detroit.” This is not just because I’ve (1) never been there and (2) I may be crazy, but fewer cities in North America scream “convention” more than the Motor City. While it has been the butt of urban blight jokes for decades, it has everything: pop music history for the cultural geographers, the epicenter of the urban gardening movement, the historic epicenter of the American automotive industry for the economic and vroom-vroom (aka pure enthusiast) types, and it’s right across the line from Windsor, Ontario for the passport-holding types (which should be everybody). AAG was last held in Detroit in 1985, and 2,377 people attended, 43.7% of membership at the time. That percentage may seem paltry by today’s standards, but keep in mind that DC drew 2,707 people (47.4% of that year’s membership) the year prior, and in 1989 Baltimore would draw 3,115 (49.2%). Both DC and Baltimore were well into the “crack era” by the mid-to-late-1980’s, putting Detroit’s well-documented decline at the time into perspective. Whether the cities are “safe” in the public imaginary should be of little concern, particularly for those staying at the conference hotels. Considering how our conference this year was held in San Francisco’s notorious Tenderloin (where I spent all week with prostitutes and hustlers following me, both a part of city life but probably not what those attendees with their families in tow had in mind), perceptions of safety are highly overrated. Even downtown Los Angeles in 2013 (notably, a dip of over 1,300 registrants from New York in 2012) was beset with icons of urban blight that (given testimonies from Mike Davis and Edward Soja) were inevitable. Not to dwell on the negative aspects of any major urban area, Detroit would be amazing.
Suggested (only sort of joking) Guest Speaker: Andrew W.K.

My love of this city has been pretty well-documented (if not so much on this site…I honestly can’t remember). AAG has held their meeting here three times, the last of which was in 1965. 1,250 people  (1/3 of AAG’s Membership at the time) attended fifty years ago and saw a sleepy Columbus that would, about four decades later, blow up into what can barely be contained as the Midwest’s best secret. While The Ohio State University dominates the city’s core, the downtown area, the State capital, and other industries have expanded the city’s population and role in America’s core. It would be great for the AAG to set up in the city’s convention center and capture this zeitgeist. Not only would attendees be across the bridge (that brilliantly conceals a freeway, for the urban design types) from the Short North dining/going-out district, but they’re also walking distance from North Market, the Ohio Theater, and the Arena District (in case the Blue Jackets have a home-game-heavy week like the Bolts did in ’14). Columbus has crept into the top 15 largest U.S. cities (almost tied with San Francisco proper, believe it or not), so there is little question whether Columbus could handle a convention of AAG’s size. Also, we can eat all of Mikey’s Late-Night Pizza, Dirty Frank’s delicious (veggie and non) hot dogs, and Jeni’s insanely good ice cream.
Suggested (semi-joking) guest speaker: Urban Meyer.

New Orleans is a fantasti…. oh, yeah, nevermind! Rather than spell out all the reasons why bringing the meeting to NOLA in 2018 is terrific idea (AAG are way ahead of me), I’ll just reiterate here what I’ve said to countless people over the past 18 years since I first visited: it’s the coolest city in North America.
Suggested Guest Speaker (not at all joking): Marc Morial