Thanks for the support on the last post about our GEOG 320 Project. I’ve got more coming soon from the Cultural Geography class, as well as some news about a couple of local and regional presentations I’ll be making this fall! 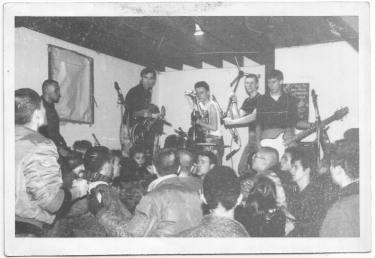 A fight breaks out against Neo-Nazi skinheads in the crowd at the final R.A.S. show, 1984. Photo courtesy of Philippe Roizes, all rights reserved.

In the meantime, here is the most fascinating way you could spend your next hour-and-change. ‘ANTIFA: Chasseurs de Skins’ presents 1980’s Paris in all of her brutal reality. Some friends of mine had a conversation about just how much music influenced personal identity and clannish behavior for Generation X. This often played out politically in violently reactionary pockets of Western Europe on the heels of the “no future” era and international malaise of the 1970’s. Class struggles became, at the behest of the political right, “racial” and political struggles, and these played themselves out in the punk scenes in and around Paris for several years. It’s easy to forget how a band like Berurier Noir could have had such a profound impact outside of just music.

One thing that hit me while watching this was, comparatively, how pacifist the North American left is versus the French, Spanish, and British left(s). Actual progressive voices get quelled easily here (and the ones that don’t, well, have been putting their foot in their mouths of late). This is, among many other reasons, why the Presidential nominee of a major party has been able to succeed on a platform of symbolic (and actual) violence at a grassroots level. Unsurprisingly, violence is the only rejoinder many of these people understand or respect. Racists, Islamophobes, and other people who lack the inherent ability to think critically (or at all, really) have little reason to fear bricks to the head or other such retaliation, so they behave in an animalistic way and refuse to practice compassion. But then again, that’s just one American’s opinion and interpretation of a wonderfully done documentary.

For more context, see this article about the Black Dragon gang of anti-racism warriors and an accompanying documentary in the same style.