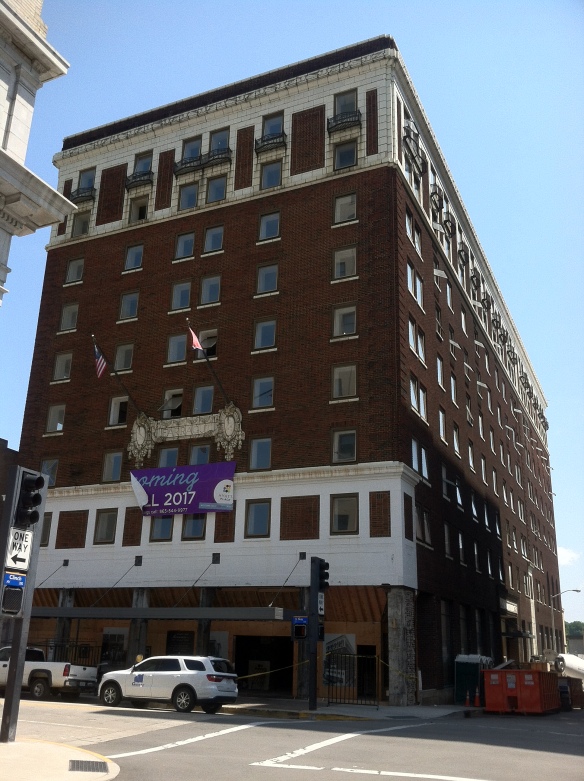 I took this when I walked by the site on Wednesday afternoon, mostly because of the shiny new “Coming Fall 2017” Hyatt banner.

I can’t remember how much I’ve covered the Farragut Hotel and its intersection with the Ben Irving Postcard Project, but from what I can tell, he stayed there at least once in 1935 and then possibly again in 1940. That’s really all I could ascertain from the notes and the dates on the cards.

Regarding the development’s news, the Knoxville News Sentinel published this article last year about the official development plans, which stated their plan was to reopen during the summer of 2017. So, knowing the pace of development in Knoxville, I looked forward to being able to see their finished product in late 2019.

I was fortunate to be able to visit the project as it currently sits when Knox Heritage had a special event there last Fall. I took several pictures while wandering around the construction site and I never did anything with them in October, so I figured I would post some highlights here. Forgive any unintentional trespassing I may have done.

The boiler room, which from what I could tell was the lowest point in the building.

The main elevator shaft, currently ripe for an action movie.

I saw this pile of neon lightbox letters in the basement. I’m trying to think what they would have spelled that included a “B.”

Knox Heritage has been teasing a follow-up event where their members will get a free preview of the hotel when it’s ready to officially reopen this fall. I’ll do my best to recreate these photos, but I can’t make any promises with the ones of gigantic death-hazard holes. I imagine they’ll patch those up.