Last week, I returned to my alma mater Cal State Long Beach for the biennial Emotional Geographies Conference. This was the first time the heavily-international conference had been held in the United States, having been as far afield as New Zealand in the previous decade. As conference co-chair Deb Thien remarked, Long Beach had been selected as the host prior to the once-unimaginable political occurrences of the past year. A lot of members opted not to travel to the US for such reasons, which was disappointing at first, but it gave the conference a great silver lining. It enabled near-100% attendance for every paper presenter and a genuine intimate setting where it was possible to meet and actually have a meaningful interaction with everyone else there. At conferences like AAG or even smaller regional conferences, it may be impossible to have meaningful interactions with anyone, much less dozens of people devoted to your same sub-field. Such are the advantages of small conferences. 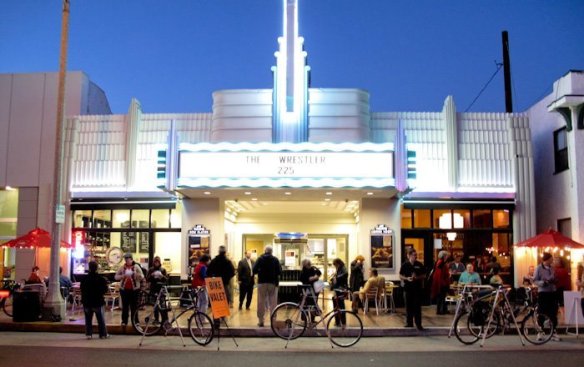 Via cobalb.com. A friend and I caught a screening of ‘Citizen Jane’ (a documentary about one of the 20th century’s great prophets Jane Jacobs) on Wednesday night. It wasn’t bad, but I mostly appreciated the two hours of down time in an air-conditioned theater.

Also, I can’t remember how much I’ve gone into it here, but Long Beach, California is a pretty sweet little city. Granted, nowhere in North America but LA’s shadow is a city of over 500,000 people “little,” but it can’t help if Los Angeles (45 minutes or 7 hours north, depending on what time you get on the 405) makes everything about it seem relatively laid-back and put-together. Also, seaside paradise San Pedro is a short drive across the Vincent Thomas Bridge.

I was able to present some of the emotional geography facets from my dissertation research on Wednesday morning. The diversity of papers and subjects was impressive; in just one session, the conference attendees learned about trans visibility in Roller Derby, queer spaces in Palestinian hip hop culture, DC punk’s impact on Paris, and the contested history of Long Beach’s rancho system (link for video).

It was also a real treat to be able to hear Liz Bondi speak about the relationship between psychotherapy and geography in her keynote. Another presenter, Mancunian Natalie Moss (who I mistook for Welsh based on her accent, for some reason) discussed the heavy psychological toll that human research can take on both the informants and the researchers, arguing for the value of therapy in praxis.

I’ll write more soon with some thoughts on the abbreviated paper session I was fortunate to chair on Friday morning and the bizarre places it steered my brain. For now, here are some pictures I took over the three days. More photos taken by Long Beach student Ken Fichtelman are available via Dropbox here. 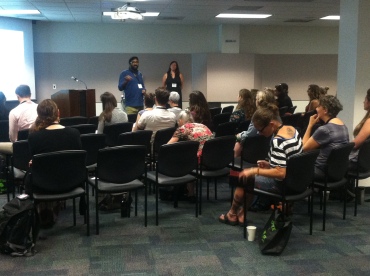 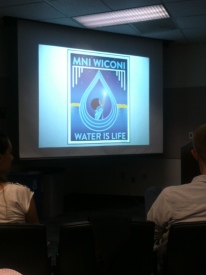 A great graphic to end Roxanne Ornelas’ presentation. Roxanne is Yaqui and a devoted “water-walker” protecting water sovereignty at a particularly contentious time.

My good friend Joe Diminutto (who happens to be an ace American gondolier) talks about romantic spaces of the Naples canal system in Long Beach.

This is Tiger Lily. She lives in Hollywood. She didn’t attend the conference, but I thought a cute cat picture wouldn’t hurt here.

Craig Stone brings conference attendees around the home base of the American Indian Studies department.

Craig Stone talks about the ‘linguistic landscaping’ of the CSULB campus.