As a thirty-something white person who wears glasses and has been to grad school, I love the band Pavement. I’m taking a quick break from my California Excursion updates (I have a massive entry coming soon for Part III) to bring back up one of my favorite Geography 101 assignments. I had the opportunity last night to see Spiral Stairs (aka Scott Kannberg) play a great set of songs with his current band that mixed Pavement classics on which he sang lead like “Date with Ikea,” “Two States,” and “Kennel District” with songs off his two solo albums. It had been a little while since I’d properly geeked out over Pavement, and last night’s show gave me a perfect excuse to, so thanks to Jason Boardman and the Pilot Light crew for that. 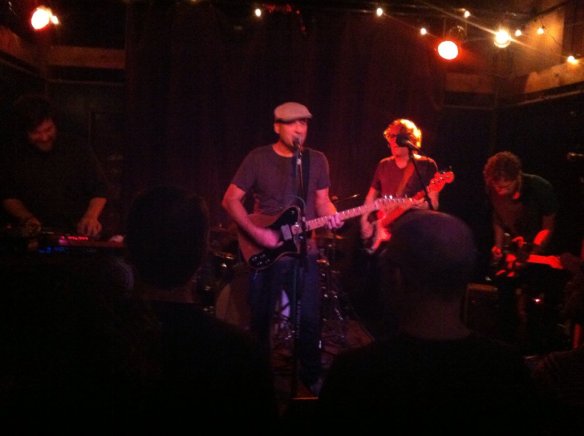 As I alluded to in my entry two years ago, Pavement were hard to pin down geographically. The two founding members of the band, Kannberg and Stephen Malkmus, grew up together in Stockton, a Central Valley city that has become infamous over the past few decades for blight and poor urban planning around its social issues.  The other three members who rounded out the classic lineup of the band came from scattered points on the East Coast, which ultimately spelled the end of the band in 1999 when distance between them all made it unsustainable to keep going.

I just found this relatively new lyric video somebody made for their song “Unfair,” an album track on Crooked Rain, Crooked Rain (Matador, 1994) which runs through points on the California map similar to how Damon Albarn sang Blur’s way around England on “This is a Low.” I’ll embed it here for your enjoyment.

As I was telling my friend last night, one thing I really have grown to appreciate about Pavement over the years is just how overwhelmingly ordinary the five of them are. None of them really look like you’d expect them to be in a band, much less one of the most genre-defining of their era. To this day, I still get skeptical when I see a band who look like a band; take that for what it’s worth. Either way, my friend asked me which album to start out with, so I had to be honest and just rank their five studio albums for him rather than single one out in particular…

Outside of Terror Twilight (which is still very good, don’t get me wrong) being last, I feel like a lot of indie rock fans would disagree with me on that order, which is encouraged here. Also, some of the band’s non-album tracks like “Frontwards” and “Debris Slide!” (which may be directly inspired by CA… hard to know) are essential as well. And though it isn’t one of my favorites, Pavement also contributed a single “Painted Soldiers” to the Kids in the Hall movie ‘Brain Candy,’ which leads me to end this entry and tease my upcoming one on the California trip: Scott Thompson will make an appearance.