Over Spring Break, a friend and I headed up to the Southern Great Lakes Region on a road trip. I brought along a few selections from the Ben Irving postcard collection. Here is what came of that.

Irving mailed this one from Indy to family in Hartford on the evening of September 23, 1934. The caption reads “Obelisk of black granite in the INDIANAPOLIS WORLD WAR MEMORIAL PLAZA AT INDIANAPOLIS showing 100 foot pink marble basin of electric fountain illuminated.” I always find the different ways objects reference the Great War interesting, considering how in 1934 the building blocks for World War II were in place but it was not yet imminent. I suppose it was common, more than fifteen years on, to refer to the Great War as ‘the World War.’ I wonder if the terminology differed depending on where it was published.

Also noteworthy was this card’s crude illustration and its unique publisher. Rather than the nationally oriented Teich Company, this card was printed and distributed by a local concern: the DeWolf News Co in Indianapolis. Strangely, this doesn’t turn up in a search for DeWolf in the Indianapolis Library Postcard Collection here. The artist seemed to want to depict the underlit fountain, which I’m sure would be running in full vigor during the summer, but what came out was a botched, blotched depiction that looks closer to how a schoolkid might draw fire. The obelisk at attention also appears to be dark blue with a golden triad on top.

At any rate, this shot was challenging. Thankfully, my smartphone’s camera has a smart iris/shutter tandem. I think I took this around 2pm, right before we left town and right when the sun was sitting almost directly above the obelisk’s tip from this vantage point. It took a couple attempts, but it came out. Here are a few outtakes where I played with card placement and focus. 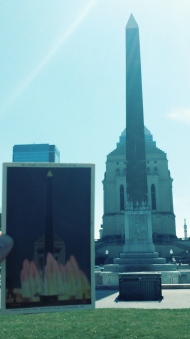 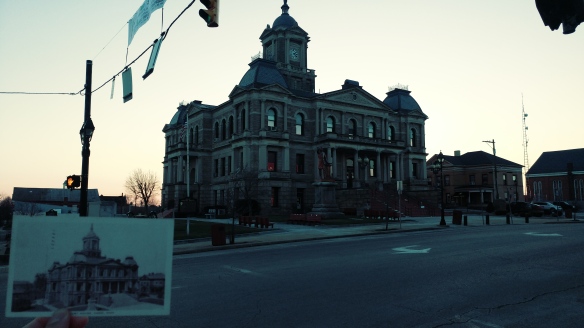 Irving mailed this postcard home to Brooklyn from Wellsburg, WV (right across the state line) on December 16, 1936. The card was published by the Cadiz News Agency. His note on this one was pretty lengthy, asking my grade-school aged grandmother if she had been behaving. He also mentions “remember Clark Gable the actor was born in this town. His picture is all around here. Interesting.”

At the time Irving sent this card, Gable was probably the biggest star in Hollywood. Today, Gable’s birthplace and an annual festival there every February are the depleted town’s two biggest meal tickets. Though he was born there, he wasn’t from there, technically. At least, this was what Cadiz native Jamie Miller told me when we stopped to chat outside of her Ohio Valley Winery. Miller also told me that the vacant lot across the street from the Court House building (whose roof most likely provided the vantage point for this postcard) was occupied until a few years ago by Mr. Fish, a seafood joint torn down sometime over the past two years. My friend and I had to push on to Pittsburgh (as the sun was obviously setting), so we couldn’t stick around, but if you’re ever passing through Cadiz, check out their Winery.

We pulled into Cadiz with about 20 remaining minutes of sunlight and I did my best to get the photo you see above while it was still recognizable. Most of the features in the postcard are still visible, including the statue in the foreground. Here are a few of the other shots I took in the vicinity. 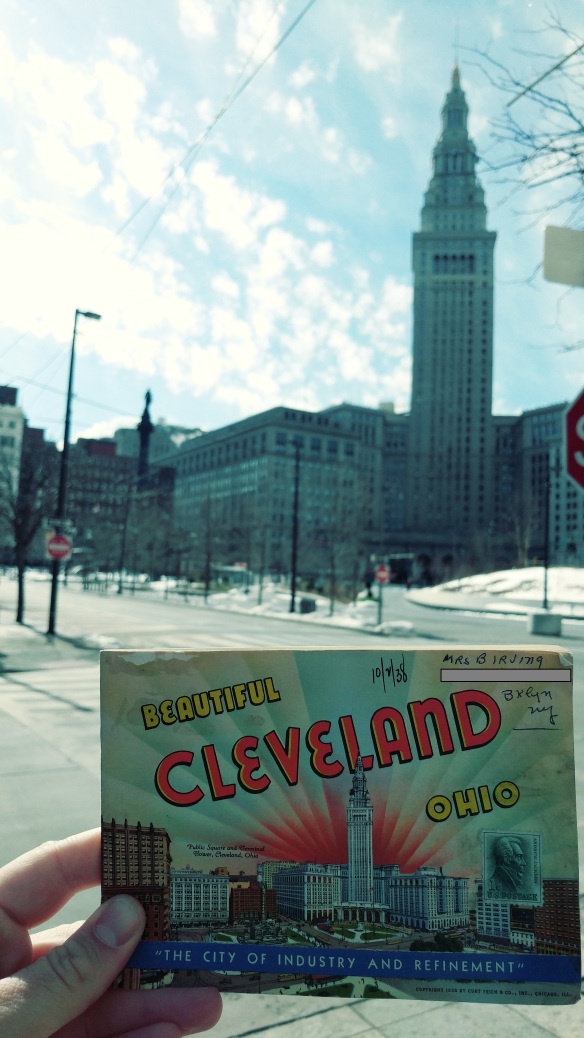 This souvenir packet, mailed to Brooklyn in October 1938, gave me so much material to work with. First of all, seeing Cleveland referred to as “The City of Industry and Refinement” invites a whole bunch of jokes about its de-industrialization. Of course, that’s been done to death. The cover features a vantage panorama of Public Square and Terminal Tower, which you can see in the blurry background of the photo above. The May Company Building, the white structure next to my thumb, now houses a Community College and a Taco Bell Cantina (a late-night Taco Bell that serves alcohol… what a time to be alive).

The packet had a slew of information about Cleveland’s then-recent development. It doesn’t mention anything about the May Company, but it does detail the function of the Terminal Tower and the network connected through the unified terminal, often called the “Gateway to the Continent” at the time. The only other featured site I was able to find nearby was the Public Auditorium, a massive building located next to the Fountain of Eternal Life. Though we couldn’t talk our way inside, I did snap this from a platform atop the submerged Convention Center across the way:

From what the desk guy told us, the interior was undergoing some work and was closed to the public. They could still hold events in there, however… he mentioned something about wrestling. No idea. Hopefully, next time I’m in town I’ll be able to make an appointment to recreate the interior shot featured here.

According to the booklet, the Civic Auditorium went up for $15,000,000 in 1922, which converts to $220,997,930 today, which is absolutely insane. The packet described it as “the finest and most serviceable municipal auditorium in this country…[with] acoustics [that] have been declared perfect.” Additionally, it describes a $100,000 pipe organ ($1.7 Million today) with over 10,000 pipes and 150 direct speaking stops. I’m not an expert on pipe organs, but that sounds massive. Here are a couple of shots I took around the lobby: 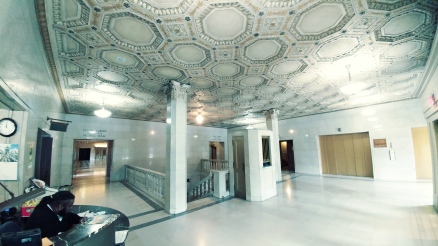 If you’re from any of these locations and have any good stories, pictures, or links to share, leave a comment! If you haven’t spent any time in any of these cities, make it a point to check them out, even if it’s just for the opportunity to live más in an old department store building.

Speaking of Cleveland department stores, we paid a visit to the house from A Christmas Story, which I will hopefully get a chance to write about soon. The visit couldn’t have come at a better time, since I will be introducing film geography to two of my classes in the next few weeks. What a perfect case study.

Anyway, have a great week, everyone.