Last month, I spent a few days passing through the lower Midwest, including one of my favorite cities, Louisville. Not only is Louisville an overwhelmingly cool city with a great musical history (and according to Ethan Buckler a consistent threat of twisters), it’s also rich with history. Like its counterpart up the Ohio River Cincinnati, I imagine Louisville was a major crossroads during the antebellum era and reconstruction. It also gave us Muhammad Ali, quality baseball bats, and Elliott.

The two postcards I had on hand, like many items in the Ben Irving collection, were of newer landmarks the city was trying to show off in the WPA era. The Post Office and Memorial Auditorium both foreground Greco-Roman elements in their architecture. Only the Post Office postcard had any information about the building; it reads “Cost $3,000,000.00. Covers block on Broadway between 6th and 7th Streets.” Pretty straightforward. According to one inflation calculator, 3 Million dollars in 1930 would convert to $44,848,829.59 in today’s currency.

The more interesting building, for me, was the Memorial Auditorium. This postcard had absolutely no information on it, but according to the Auditorium’s official history, it opened in 1929 and was designed as a deliberate Greek Revival throwback by Thomas Hastings. 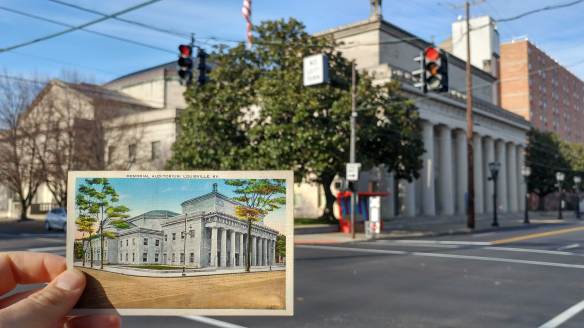 Though it looked like there were some city offices inside the building (I saw a security guard wander out one of the side doors and leave shortly after I took the above picture), nobody appeared to be home, so I couldn’t go inside. I did wander around the building to get a more detailed look. My favorite part may be the bas reliefs, which you can see pretty clearly on the 1936 postcard image.

Thank you for reading. Coming soon: a failed attempt at an ambitious vista re-creation in West Virginia!