Better late than never, as promised, here are some additional photos from AAG DC, taken and shared with me by several generous walking tour participants.

As I posted about a couple weeks ago, I hosted a Q&A with Ian MacKaye at the Wardman Park Hotel on Friday afternoon. The full audio of that conversation, along with some photos taken by Josh Pitt of Palgrave and Emily Fekete of the AAG, are available on that previous entry. 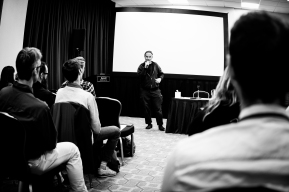 As I mentioned last month in a post leading up to the meeting, the first (and probably only) AAG DC Punk walking tour got a shocking amount of interest. I wound up taking a good handful of folks who registered at the last minute on-site after the inevitable few registrants dropped out. I didn’t get a proper headcount when we set off from the hotel, but the photos below should be a good indication.

STOP ONE: THE DUKE ELLINGTON BRIDGE

I look like I’m proselytizing, and in a way, I am. I took a chance to talk about the role DC’s physical geography played in events that punctuated punk history like the late-80’s percussion protests at the South African Embassy. Standing on the bridge named after the man gave us a chance to give Duke some love, too, being as how he’s easily in the conversation about the most vital American musicians of the 20th century. The way he wrote short, punchy songs so prolifically and so well invariably laid the early groundwork for rock n’ roll, and what was punk rock except a return to rock n’ roll’s roots? 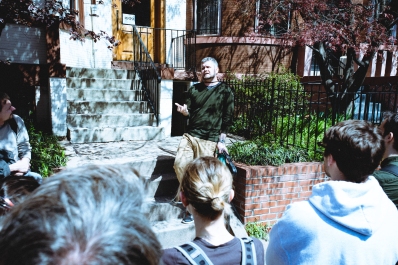 While I was trying to recall the bands Ian MacKaye told me were on the bill for Minor Threat’s first show in this house, an older gentleman stepped out onto the porch of the house next door. He apologized for interrupting, and I said no worries and asked him how long he’d been living there. “1980,” he said. He verified the story I was relating, citing the great parties his neighbors at 1929 would throw back in the day. He also said the house had sold for $2,000,000, which was more than I recalled reading. Given the turnover in that neighborhood over the past few decades, it was an amazing stroke of luck.

Once a Yippie watering hole for Corcoran Art students and more recently the home of Crooked Beat Records (when I moved to DC in 2005), the building that built harDCore currently houses an Insomnia Cookie shop upstairs and a grow shop downstairs (keeping in the spirit of DIY, I suppose). Neither business could withstand a crush of almost 30 people and the grow shop, per DC law, needed to check every entrant’s ID, so I stood on the staircase to Insomnia to deliver my spiel. 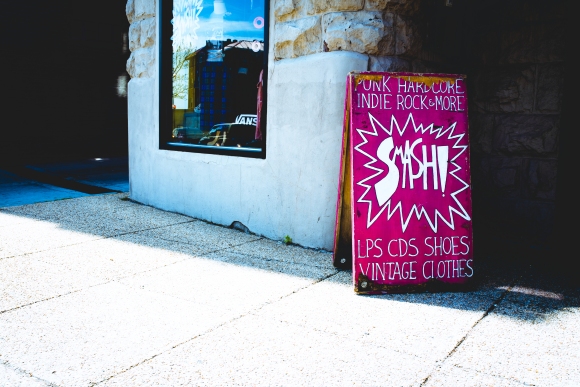 Immediately after our stop at the original Madam’s Organ house, we crammed into Smash! Records next door. I introduced the group to my old friend Matt Moffatt, who gave the group a brief history of the shop, which started in Georgetown in a different era and moved to Adams-Morgan in the mid-2000’s. 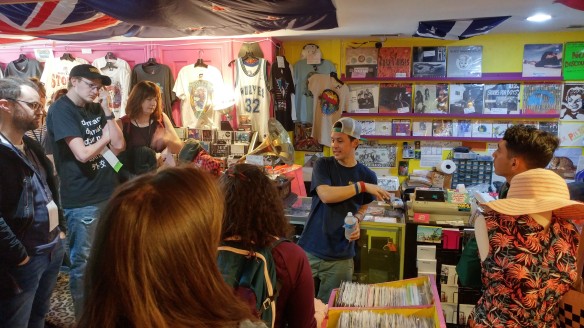 After Smash!, we took a break to get empanadas and shop, reconvening to head down to the star-intersection at 18th and Florida and U to discuss the role of immigrants in the growth of underground music in DC. Two sites of interest there were the (now closed) Eritrean restaurant Dahlak, where I saw friends perform a number of times in the late 2000’s, as well as the neighboring building, now a young-professionals’ gym, which regularly hosted Go Go shows in the 80’s as an African-owned club. Two very pleasant English women on the tour, who admitted to me in the end they went in knowing very little about punk, told me how much they liked how I incorporated migration into the tour. It was one of the best compliments I received all day. DC Punk, just like so many pieces of any city’s “real” culture, owes so much to immigrants who opened up their restaurants for live entertainment. The city’s punk scene has included so many sons and daughters of immigrants, as well.

The next stretch was the longest walk of the tour, a haul up Ontario Street back to Columbia Road. The sun was so powerful and the heat was so strong, I worried that half of the tour would drop off, but everyone who was with us at the bottom of the hill was in great spirits when we reached the top for: 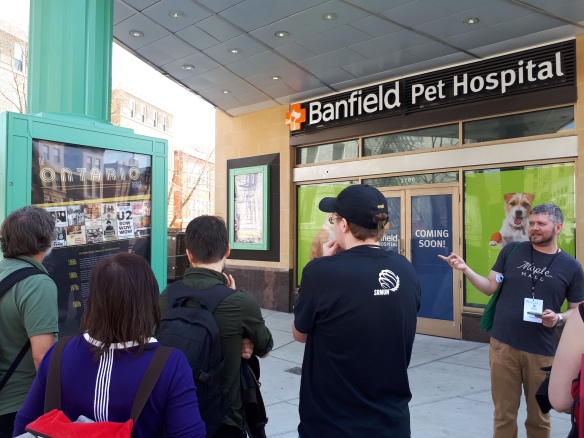 The AAG DC Punk Walking Tour stops by the site of the Ontario Theater, now the Banfield Pet Hospital. (Photo by Marton Berki)

Unlike anywhere else we stopped, the building that once housed the Ontario Theater (the predecessor, at least in the Seth Hurwitz sense, to the 9:30 Club) actually had a historical marker of sorts. As this photo by Martón Berki details, U2 once played there in 1981, right on the cusp of breaking. Prior to it’s period as a music club, the Ontario had been a movie theater kept open through the 1970’s by the local Central American population. Further history of the building is available on Cinema Treasures and Streets of Washington.

Outside Mt. Desert Island Ice Cream at the end of the DC Punk Walking Tour, 04.06.19 (Photo by Martón Berki)

The end of the tour was a real treat, literally and figuratively. Josh Pitt, my good friend and editor at Palgrave, treated the whole tour to ice cream. Given the heat, this generosity could not have come at a better time. It just so happened that Mt. Desert Island was not only a couple blocks away from the site of the legendary Wilson Center, but it’s also owned and operated by Melissa Quinley and Brian Lowit, a pair of great Dischord Records vets. Brian’s own label, Lovitt, released some solid gold by the likes of Frodus, Engine Down, Sleepytime Trio, and many more. Melissa and Brian came outside to talk about the finer points of underground music, ice cream, and how community ties those two together.

As my delicious ice cream was melting and running down my hand, I spoke for a couple more minutes to the group outside, thanked them, and we headed back to the hotel. It seemed like everybody enjoyed themselves and learned a lot. I’m grateful it all went off catastrophe-free.

Thanks again to everyone who took part in the DC Punk Walking Tour, and special thanks to everyone who shared the above pictures. You may notice that a bulk of them were taken by the multi-talented and immensely supportive Steven Donnelly, from Belfast. Keep tabs on him and his work via Instagram at mralligator7. 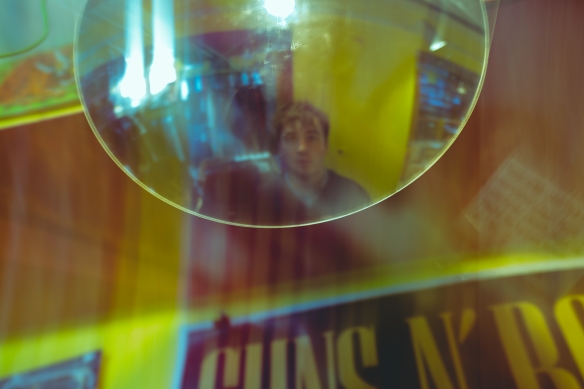