Happy Sunday. It’s a rainy and cold day here in Michigan, and I’m taking advantage of that to catch up on a few things I’ve neglected over the past couple of weeks. I don’t have time to write a proper entry (yet) about my Ben Irving Postcard searching in Detroit, but it was a successful start. In the meantime, I wanted to signal-boost a great article in Sports Illustrated and a great new documentary. I don’t know how valuable my endorsement here is, but I wanted to at least commend the respective producers for jobs well done from this geographer’s perspective. 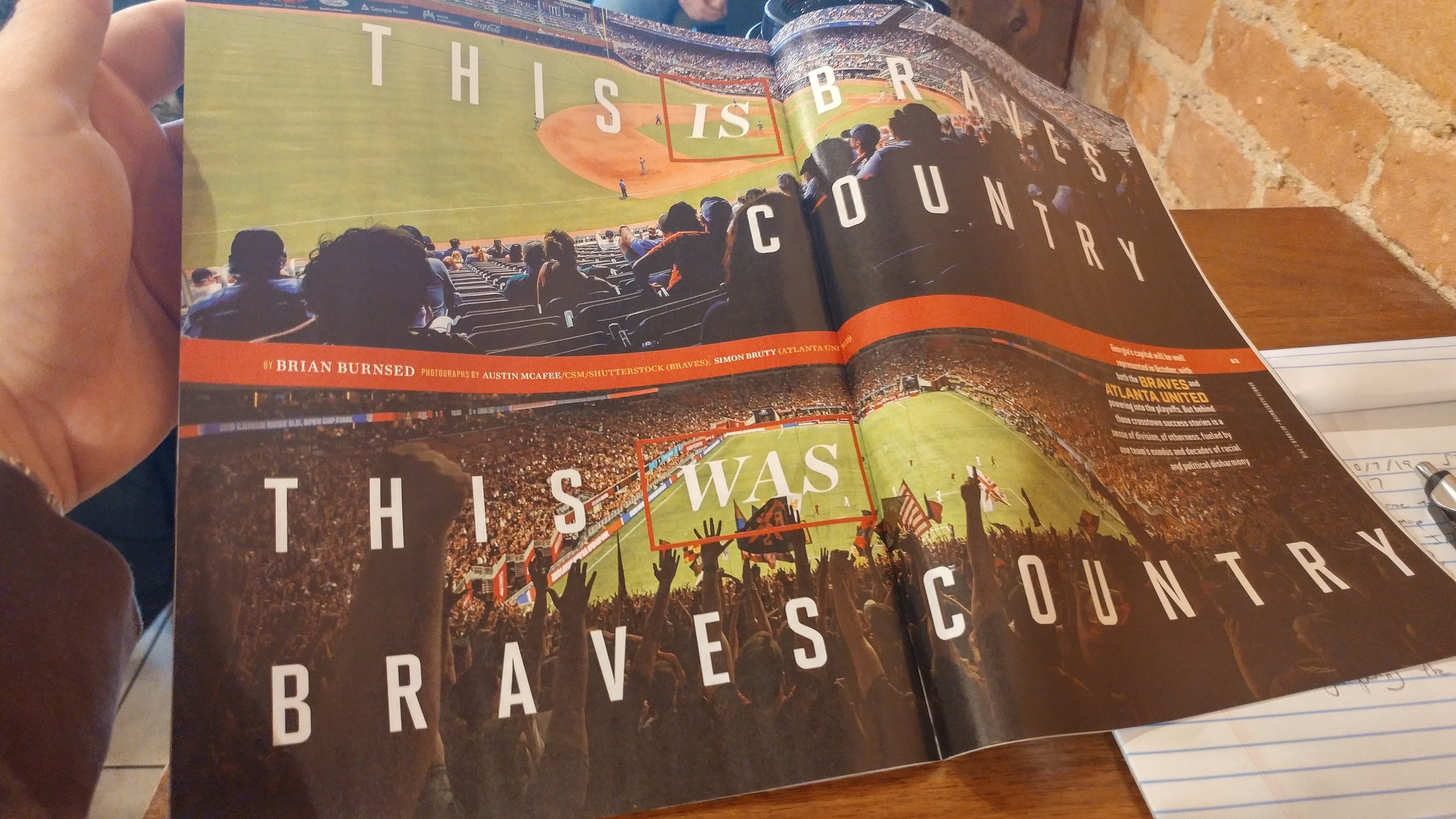 I’ll be honest; I subscribed to Sports Illustrated following the Caps’ Stanley Cup victory so I could get an Ovechkin print and a limited-edition Washington Capitals Collectors’ edition. I only care about a few sports, and my short list doesn’t include the gambling-heavy ones the magazine usually focuses on.  All that being said, Sports Illustrated deserves a LOT of credit for elevating their topical writing and specialized coverage in an age when some magazines (which shall remain nameless) have turned into tabloids in an act of desperation to retain physical sales. For one thing, their 2019 swimsuit issue made a point to feature an ethnically and physically diverse set of models, focus on the models’ lives and thoughts, and address the elephant in the room about why the swimsuit edition even exists.

For another thing, the latest issue (October 7th, 2019) includes an excellent article about race, class, and baseball in Atlanta. Brian Burnsed takes a critical look at how the Braves’ move from Fulton County to Cobb County is not only a gigantic middle-finger to the team’s middle- and under-class African-American fans, but also microcosmic of Atlanta’s accelerating privatization and segmentation of population along racial and political lines in its unyielding sprawl. Though several of my best friends live there, I would never consider Atlanta among my favorite American cities, and I’m hardly familiar with the MLS stars Atlanta United, but Burnsed’s article makes me want nothing more than to go and hang out with the team’s fans in “the Gulch.” I had the “privilege” of going to a Braves game at Suntrust Park last season, and (to give the most insightful, academic analysis) it sucked. We parked in a lot adjacent to an office park, paraded over one mile with thousands through at least one or two other office parks, and sat in a sea of fans who, following a spirited video of Jason Aldean telling them to do so, did the tomahawk chop (in 2018). It’s all disenchanting, and a little dispiriting, particularly considering the angry letters I’m sure SI is receiving from “100% not racist” white Braves fans in the wealthy, season-ticket holding pockets of Cobb County upset that Sports Illustrated had to “make everything about politics.” I’d be interested in seeing what happens when Atlanta beefs up and privatizes the Gulch around Mercedes-Benz stadium.

Though I’m still processing the fact that it happened in the first place, on my way out of Detroit, I stumbled upon a screening of James June Schneider’s new Punk the Capital documentary at Third Man Records. I met James a few summers ago when I was in DC to do some zine research for my dissertation, so I wanted to say hi and congratulate him on completing the thing. I knew that the film’s release had been delayed for some years. On Friday night, I found out that he had been working on it for over 15 years, and it showed.

Punk the Capital is a MASTERPIECE, and I can’t recommend it highly enough. I don’t think I had seen as much as five seconds of the footage, most of which came from Paul Bishow’s treasure-trove of Super 8 footage from the proverbial ‘back in the day.’ I can’t remember the last time a documentary made me smile and tap my foot this much, and in a strange way, it made me feel even more validated in devoting so much of my own life to studying and writing on how harDCore has seismically changed the world.

Also, the Q&A was a lot of fun, replete with stories from the handful of punk legends sitting on the stage. Tesco Vee mentioned the latest price tag he spotted on one of those /100 Necros Sex Drive EPs on eBay: $5,300. That’s not a typo. Five thousand and three hundred dollars. Good luck if you spot one for sale and have a 401k sitting around you can cash out.

James was joking with me after the screening that he and I would be competing on google now. I don’t imagine that will actually happen, but on the off chance somebody stumbles onto this website or Capitals of Punk, I’ll copy and paste the slew of upcoming Punk the Capital screenings here, in case you’re in one of these cities so you can drop whatever plans you have to go see the film (if isn’t already sold out).