A week ago, when I was writing about the Replacements, I couldn’t have anticipated we’d be here. I don’t have a whole lot to say about the ramifications of this moment in history that’s any better than what Mike Davis wrote (see my previous entry).

Considering how COVID-19 inspired the cancellation of multiple major sporting events, including March Madness, the next few weeks are going to help shift into focus just how necessary many of these “unalienable” institutions truly are. South By Southwest and Coachella both cancelled, and as obvious as the lost revenues will hurt many individual artists and (yes, some) vendors, both events were unquestionably bloated and appeared to have been teetering on the edge of sustainability for years. 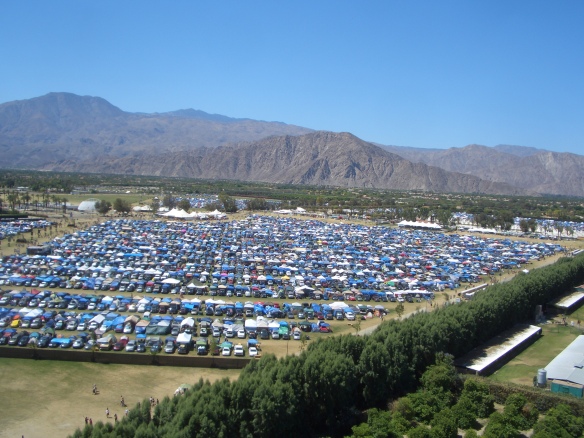 The euphoric experience of seeing New Order in a giant tent at midnight with thousands of other people wasn’t enough to cancel out how there are so many things wrong with this picture. (Coachella, April 2013)

To be fair, I’ve only been to Coachella once and I’ve never made it to SXSW, but the former presented a brutal overuse of already-constricted resources in California’s low desert, and the latter… well, I have many friends who’ve enjoyed attending it, but most of my Austinite friends and musician friends (who actually work or play at South-By) hate it. Mega-events like these represent the late-capitalist culmination of generations of corporate commodification of pop culture. As Simon Frith put it over three decades ago,

The rock era – born around 1956 with Elvis Presley, peaking around 1967 with Sgt Pepper, dying around 1976 with the Sex Pistols – turned out to be a by-way in the development of twentieth-century popular music, rather than, as we thought at the time, any kind of mass-cultural revolution. Rock was a last romantic attempt to preserve ways of music-making… that had been made obsolete by technology and capital (‘Music for Pleasure’ 1988, p. 1).

Cut to: A scene I think about a lot. When I was 18, I stood in the back of the crowd at the Warped Tour Main Stage, watching Henry Rollins scream about how some corporation had the nerve to charge $4 for a soda. Nearby, a young kid grabbed a Gatorade from an ice barrel, and the middle-aged vendor screamed “Hey! Put it back, you little shit.”  Corporate America had co-opted youth culture (again, in another vein), and they were making it increasingly clear that they would only tolerate the youth so long as they kept their cash flowing. It astounds me when people (mainly my age and older) wonder “why kids today don’t care about rock music.” Moreover, I can’t help but imagine that experiences like those accelerated Rollins’ departure from the music business.

As festivals got increasingly abundant, expensive, and bloated, I always wondered where the tipping point would be. Well, here it is. A lot of pundits thought it came in the form of the failure of the Fyre Festival, but (hilarious as it was), that fiasco didn’t appear to result in Goldenvoice and LiveNation stepping back and taking a long, hard, look at what they were doing. All Fyre Festival did was prove that rich idiots were still able to sell snake oil to other rich idiots.

I do not want my propensity to excavate silver linings from the most dire and ahistorical of situations to make light of how the COVID-related halting of certain institutions has already profoundly impacted millions and will likely hit millions more. It is why I will end this post with a series of links to check out to help support those in financial or physical need this month. However, I hope more than anything that those who stand to benefit from this in any way (even in terms of valuable lessons learned), do.