On some occasions, the Ben Irving Postcard Project leads me down a path into scouring the internet for information on hotels that no longer exist in any form (unless you consider a parking lot a form). On rare occasions, his postcards lead me into small towns and ghosts of buildings that don’t exist even in (digitally accessible) historical records. Most of the larger cities that Ben visited have been blanketed with Google Streetview imagery, making ground-truthing of the postcard images slightly redundant (though never unnecessary). However, some of the smaller towns, even where Streetview previewing is possible, don’t tell much of the story.

Take, for example, the Hotel Quincy in Quincy, FL, the lobby of which is detailed in this 1936 postcard: 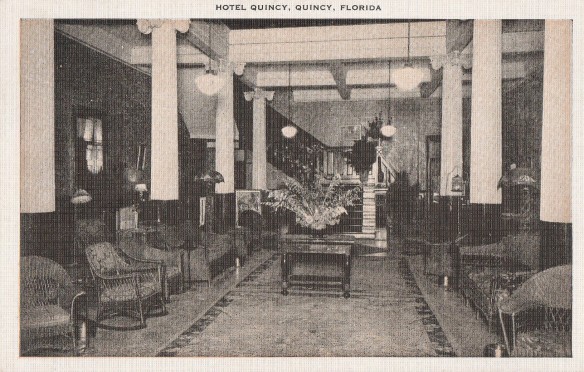 I’ve been through the Florida panhandle once or twice, mostly speeding through the stretch between Pensacola and Tallahassee save for a lunch stop in DeFuniak Springs (thanks for the tip, Bruce Hunt). I never heard of Quincy, a small town not far from the US-10 west of Tallahassee, until I saw this postcard. The city’s website, especially the history page, is bare-bones.

In 1956, Edward Gearhart wrote this history of the Episcopal Church in Quincy for the Florida Historical Quarterly, but that’s the only academic article I could find that focused on the town, other than a couple of hard-scientific studies on bees and/or soybeans. I searched for any references to the hotel on the Newspapers.com database, which turned up one promising blurb. I contacted the Florida State University library via the “Ask a Librarian” portal on their website and asked about the April 22, 1951 edition of the Tallahassee Democrat. Within a few minutes, I had that page in front of me. The article “Hotel Quincy Changes Hands” contained more information and history about the hotel than anything repeated Google searches could produce:

New owners have taken over the Hotel Quincy property and have plans for modernizing the building which has been closed for the past year. The property, at the corner of Jefferson and Duval streets, has been acquired by H E Corry, Sr., H E Corry, Jr, Miami, and associates from Mrs. Frank W Lloyd. Plans for altering and modernizing the building are in the tentative stage at present, according to Corry, though he was quite definite in stating that the new owners contemplate placing the hotel in an operable condition as quickly as possible. The hotel has been closed a year after being in operation for more than a third of a century. Corry stated it would require a minimum of from five to six months time to complete, the changes contemplated. He anticipated preliminary work would begin within the next three weeks. A modernized glass front for the hotel is prominent in tentative remodeling plans.

So, in one very short article which, in all likelihood, nobody has read in almost seventy years, I found the hotel’s location (at Jefferson and Duval Streets), rough date of opening and initial closing (ca. 1917 – 1950), and its owners in sequence (Mrs. Frank W. Lloyd until 1951, H.E. Corry and Son of Miami thereafter).

Searching for the hotel’s owners has also opened up a pair of windows into Florida’s aristocratic history. Looking up “Frank W. Lloyd,” even including a “-wright” search clause, was maddening for the same reasons that Googling “Ben Irving” is difficult (it keeps on pushing me toward Irving Berlin data). The search engines are fast, but they aren’t smart. The only publicly accessible record of a Frank W. Lloyd that lines up with this story is a mention of a Spanish-American war veteran. Of course, his name shows up all over digital back-issues of the Tallahassee Democrat.

The less common/searched name “Corry” was a bit easier, though once I put the “H.E.” in quotation marks, it got interesting. On September 9, 1949, the Tallahassee Democrat published a blurb announcing the birth of Henry Edmund III, which more or less confirms what the H.E. stood for. Also, it mentions that his grandparents were based in Quincy. His mother’s family were the Martorells of Tampa, whose name I don’t recall seeing anywhere in the Bay Area. According to a blurb published the previous April announcing the Corry-Martorell wedding, H.E. Jr. got into the family construction business and the couple was planning to reside in Miami.

I’ll spare you the other detritus I scraped up when searching that name, save for a Gadsden County Times society page mention from April 1934: “Mr. and Mrs. H. E. Corry, Mr. and Mrs. Jack Vrieze, Rev. and Mrs. E. M. Claytor and Mr. and Mrs. K. A. MacGowan of Quincy and Mr. and Mrs. Frank Harrison of Tallahassee, spent Wednesday on the Gulf on board Mr. Corry’s yacht.” Even living in age when most people obsessively curate their online personae through social media platforms, reading Society Pages from that era just feels invasive and unsettling.

I hopped over to Florida Memory to see if that name generated anything good buried in the growing digital archive out of Tallahassee. I did find a few items of interest, one of which was this photo of a judge’s birthday party from approximately 1919. Edmond Corry is labeled with #16, standing in the jacket and bowtie on the left side of the picture. He appears to be about 10 or 11 years old? 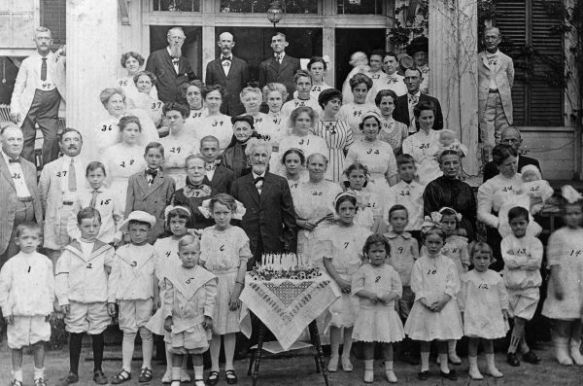 I also found several references to Corry Field, which refers to both the Pensacola Air Force base as well as the former High School’s Athletic field in Quincy. I think the latter is more relevant.

Anyway, the long and short of this is that this will require some ground-truthing in the Florida Panhandle, and I hope to respond to this entry in a few weeks with the Part 2 that it deserves. Also, while I have your attention, librarians are heroes and you should fight to ensure they get all of the public and private funding coming to them. Food for thought. Thanks for reading!

By the way, there will be an August song challenge.

2 thoughts on “The Hotel Quincy: A Panhandle Mystery (Part 1)”