A quick post to say a hearty “Thank You!” to Zack Roskop and Jordan Skeen, of Knox Brew Tours and Clinch River Brewing respectively (as well as both leaders in the Knoxville Area Brewers Association) for stopping by to speak with my American Popular Culture class today.

Our conversation provided a perfect launching point for our unit on “Beer, Spirits, and Neolocalism.”  Speaking as someone who’s been around the local craft beer community for several years now, it’s always amazing how much you can learn from talking to folks who are on the ground level about your city/region as well as the relationship between the industry and geography.

Coming soon (likely when I’m back from AAG): A New Chapter from the Ben Irving Postcard Collection (West Tennessee Edition).

I’m pleased to announce that I will be teaching a pair of classes for Session I (May 31 through July 6th) at UTK this Summer. They will be GEOG 344 (Population Geography), which I taught this past Fall, and GEOG 361 (Regional Dynamics of the US and Canada), which I’ve never taught.

Earth’s population is at a point now where it’s (1) impossible to ignore the effects of the Anthropocene and (2) at a general tipping point in terms of humanity, resources, and our role as active agents in the Earth’s reproduction. Also, to phrase it less academically, 7 BILLION PEOPLE DEAR GOD HOW DID THIS HAPPEN!? This class effectively answers that question and discusses this crucial crossroads at which the human race has found itself. We will be discussing population science and why humans do the crazy things they do just to survive depending on their place in the world.

How does one advertise a class about something so broad as “regional dynamics?” Well, one uses food, of course. No barometer of regional culture, particularly noctural, is more universally appealing. I made sure to include options here that were vegetarian and vegan in addition to the sheer excesses of a couple. Can you identify all of the foods pictured here? From the top, we have a plate of street tacos, found all over North America (anywhere lucky to have a reasonable taco truck, at least). Next down is doubles, a wonderful Trinidadian street food found in Caribbean-heavy regions like South Florida and (hopefully) Gulf Coast cities like New Orleans…this April. (Full disclosure: I haven’t had doubles since being in San Fernando two years ago this week and I’m seriously overdue for some). Next down, you see a pile of poutine, served uncharacteristically on a plate and not in a box or some kind of hutch out of a trailer in downtown Montreal, but I will let that slide. Next, a Los Angeles street dog, piled high with roasted peppers and onions as only several dozen of LA’s best sidewalk sausage roasters can roast them. They taste especially fantastic wandering out of a show in Echo Park or a game at Dodger Stadium. Last but not least, there’s a full cheese pizza from Pepe’s in New Haven, captured in the brief moment when it lands on a table before being pulled apart mercilessly by the consumers. Each of them will inhale piece after piece, wondering why time seems to be standing still. Before they even notice how much pizza they’ve eaten, it’s gone, just a pile of grease and charred dough flakes lining the wax paper, remnants that suggest there was once a large pizza in that spot. So ends a typical scene in North America’s greatest pizzeria, a mere twenty-minute walk from Modern Apizza, North America’s second-greatest pizzeria (but where you’ll probably get a table faster).

Anyway, take GEOG 361 if you’re around for the summer session, and we’ll talk about regional street foods as well as many other exhaustively researched cultural geographies.

Sometime in March of 2010,  I was involved with a wildlife filming expedition (of sorts) to Northwestern Florida when my group wound up riding through a small town called Mayo. Initially, we found the town’s name quirky enough and its water tower iconic-seeming-enough to earn a drive through the small central district. I wasn’t able to spend as much time getting to know Mayo as I would have liked. A lot of our filming happened elsewhere in the thinly-populated Lafayette County, which I somewhat ignorantly referred to as “the abyss between Tallahassee and Gainesville” to northern friends. Pragmatically, though, there is something almost ghostly about that area. Mayo’s population has hovered precariously around 1,000 for most of the 21st century, yet it’s still the county’s administrative seat. Our business there was filming some county council meetings, speaking with some regional citizens who had lost property during widespread wildfires that had ravaged Northern Florida earlier in the decade.

Students from American University interview a Lafayette County resident about his experiences with wildfire on his property while filmmaker Wolfgang Obst looks on.

Before too long, I got bored with the proceedings and decided to wander outside to stretch my legs. It wasn’t my project; I was only there because I wanted to catch another glimpse of this quiet little town before wrapping our filming week and heading back to DC. My restlessness led me to a softball tournament happening in the fields outside of the high school, which quickly became a highlight of the entire trip. I have no idea when I would have time to write a paper about it, but there has to be some ground to the types of activities that provide the most “authentic” (dirty word, I know) experience of a place. I would place “softball tournament” right up there with “local dive bar performance” as the best barometer of what constitutes the quotidian in any locality. People are there in equal parts because they want to be and because they have some type of civic or familial duty to be.

The timbre of the crowd watching softball (including myself, I gladly paid the $4 entry fee) seemed to lean toward the former. The early-evening temperature was perfect and the Florida Panhandle accents abounded (keep in mind this was still a novelty to me at the time; I wouldn’t move to Tennessee for another three years yet). Needless to say, that tiny town in what felt like the middle of nowhere off the Suwanee River left a disproportionate impression on me. I left a couple days later to go see a music festival in St. Augustine, and I couldn’t get Mayo out of my head for some reason. I had a standing offer to return to Lafayette County that weekend for what our group’s regional liaison Sharon referred to as “the biggest redneck barbecue of the entire year,” but I couldn’t manage it. In fact, a few days later I flew back up to DC and resumed my life, wondering if I would ever have the chance to pass through Mayo again.

A few weeks ago, against some range of odds, it happened. My friend Sean and I were on a road trip between Tallahassee and Gainesville, and decided to take the rural route 27 rather than the markedly less scenic and only marginally faster freeway-to-freeway route. The only real advantage to doing that would have been a photo-op with that iconic Cafe Risque “We Bare All” billboard. We made the right choice in taking 27. One thing I had forgotten was that Mayo is almost exactly in between the two cities. There did not seem to be a clear majority of Seminoles or Gators gear on license plate frames or poorly-fitting t-shirts. The equilibrium felt (here’s that word again) ghost-like. In fact, the town felt largely the same, though it was a welcome relief seeing it in full daylight.

My friend and I stopped at Meme’s cafe (pronounced Mimi’s) right in the center of town for some lunch and to recharge. Meme’s is located in the space where Sonny C’s Barbecue Chicken stood five years ago (you can see the sign in the photo of Main Street above). We were distracted with a sign that read “ya’ll come back” to exiting customers; were the proprietors of this diner trying extra hard to seem Southern? It wouldn’t shock me to find out that Mayo has pockets of retirees or non-Natives who wanted a quieter, less expensive life than places like New York, Miami, or Atlanta could have offered. We also wandered into the one prominent supermarket in town (actually directly to the right of where I’m standing in that picture above) and discovered how heavily Latin-American the market was. It came as a surprise, considering how off-the-beaten-path the town seemed, despite exploding Mexican and other Central-American populations throughout the “New South.” Only approximately 16% of census respondents categorized themselves as Latino of any race as of 2000, though one could assume that’s risen substantially since then. 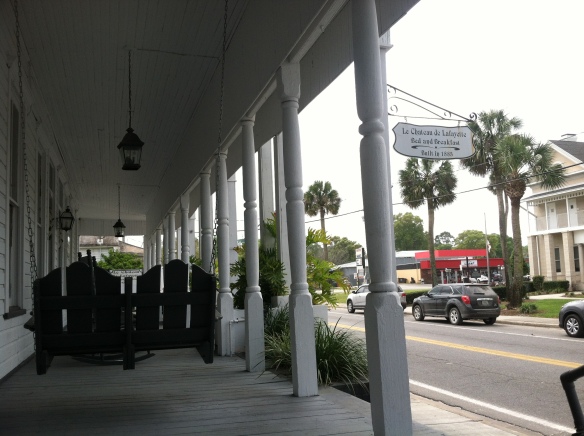 It’s easy to get condescendingly wistful when you pass through places like Mayo. It has more warmth than a succession of one stoplight towns in Northwestern Texas, and it has more noteworthy architecture than plenty of towns twice its size. But, as I discovered this time around, Mayo didn’t really need my pity. Unlike so many tiny towns in the United States, it doesn’t appear to be much worse off than it was five years ago. Actually, if you look at that photo of downtown from March 2010 again, you may notice an abandoned pair of buildings – one red, one tan. This is what they looked like a few weeks ago: 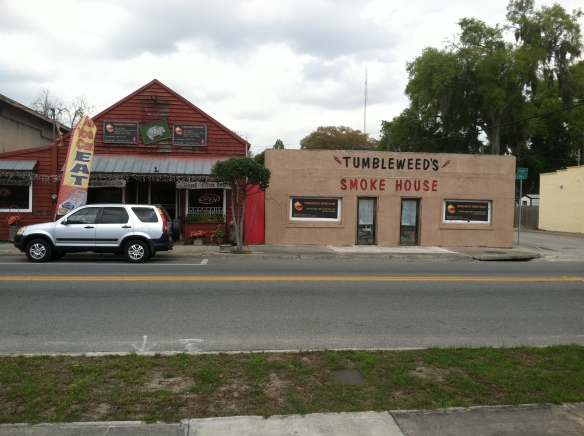 Nothing against Meme, but I wandered into the restaurant on the left out of curiosity before we left for Gainesville. The scent of roasting BBQ smacked me in the nose and I think I may actually have said “wow” right within earshot of the proprietor. It made sense, considering how the actual smokehouse sat right next door to the dining room; most of the time you see smokers sitting fairly far afield from where the customers actually eat it. Not a bad approach for the latest agents in the always-changing BBQ situation in Mayo. I wish we had chosen to eat there. There’s always a next time, though.

I know some of you may be getting sick of how much love I give Florida on this site, but it’s hard for me to resist. I know it’s inaccurate because I’ve spent a disproportionate amount of time there, but I feel like I’ve found more cool small towns in the Sunshine State than the other 49 combined. The lesson here is, no matter how you may feel about a state, you will very rarely regret taking that rural route if you have the time. 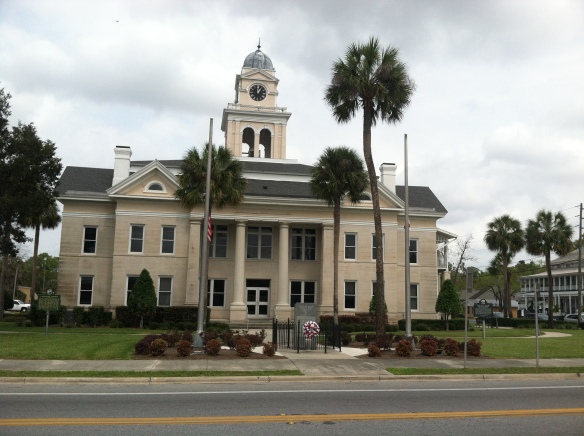