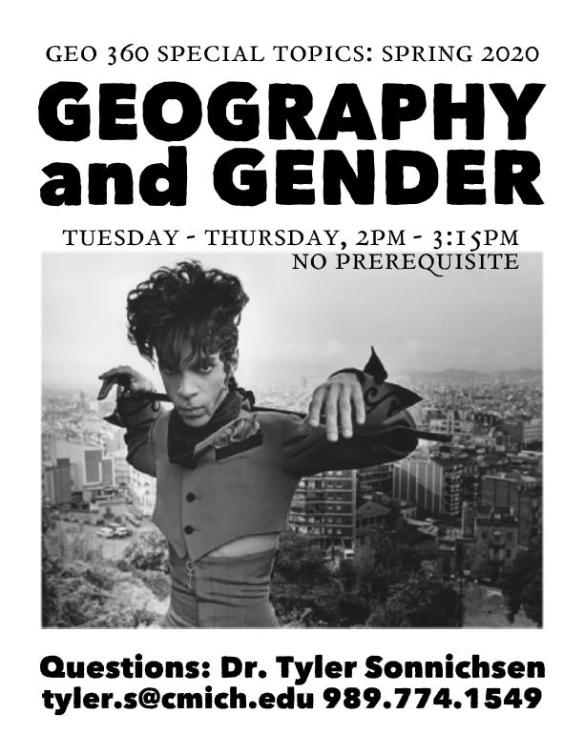 I once told myself that if I ever had the opportunity to teach a course on gender and geography, I would feature Prince on the flyer. So, here is me keeping that promise to myself. On second glance, I’m not sure whether that’s Minneapolis sprawling out behind him, but it should be.

Anyway, for any Central Michigan students interested in the course (Registration Open as of last week – CRN 22387709), I have a draft syllabus available which includes focuses on numerous topics including the spatiality of gender, the role of gender in urban development, a crash course in feminist geography, toxic masculinity, and representations of gender in place in film, TV, and music. Don’t hesitate to get in touch with any questions.

Just checking in to you let you all know that I just had a new review published in the Feminist Geography journal Gender, Place, and Culture. I had the opportunity to write about Roshanak Kheshti’s challenging and very interesting book Modernity’s Ear: Listening to Race and Gender in World Music.

You can read my review here, where you can also find information about where to order the book.

Cultural capital that you can buy in T-Shirt form. You have to admit that the “RESPECT” one is really cool, though.

The 2-Day swap meet took place right in the core of LA’s historic Chinatown district, which made for an interesting juxtaposition of landscapes.

This weekend, I kicked off the first of what will probably be innumerable rounds of research on place-as-motivator for vinyl collecting at the 5th Annual Beat Swap Meet up in Los Angeles. Thanks to the tireless efforts of the organizers and the participation of a prodigious amount of vendors, collectors, rappers, deejays, artists, producers, and a bevy of the type of characters that only LA can generate, it was an unbelievable (and almost overwhelming) celebration of vinyl culture that took over the core block of Chinatown over the course of the weekend. I met a generous assortment of cool people, and I also dug up a few new gems for my own collection, including the single weirdest unauthorized issue LP I’ve ever seen. More on that later.

On Saturday, I visited the Swap Meet as a consumer and observer, going from post to post around the Grand Star Jazz Club, speaking with vendors and crate diggers about their love of vinyl. Two particular conversations stood out. The first of which was with a journalist who confided that he wasn’t a huge vinyl collector, but he had just bought the Grandmaster Flash “White Lines” 12″ “because that was his high school’s unofficial anthem,” and he didn’t have the money to blow (no pun intended) on records back in 1984. I asked him where he went to high (no pun intended) school; he is from the Bronx. A coked-up (no pun necessary) Jerry Bruckheimer couldn’t have produced a more formulaic script.

Another person I met, a young woman who grew up in Bakersfield with a musician and collector for a father, admitted to me that she loved crate digging because it reminds her of spending time at thrift shops with her dad back in the day. We spoke initially when she saw me holding an ESG record, exasperated that I had beaten her to it. She raved about ESG (who were another Bronx institution…not as formulaic of a conversational turn as if they had been from Bako, but I digress). I ran into her later and we had a long conversation about how certain songs, especially “Moody” remind her of very specific moments of her youth in The Central Valley. If only Dwight Yoakam or Korn (stupid lack of backwards letters on WordPress!) were this funky.

On Sunday, I attended as a vendor. As far as my research was concerned, being tethered to a table certainly put me at a disadvantage. I wound up taking fewer notes than I did just wandering around on Day One, and my conversations were not as involved, since most of the people who came up and looked through my records were loathe to get too deep into conversation. There were plenty of exceptions, of course, but as one of the owners of a Highland Park record shop told me, that time the vinyl junkie spends flipping through a crate of records is “sacred, and you don’t want to interrupt that.” In retrospect, I wish I had tabled on Saturday, because Sunday was the immeasurably bigger day for the swap meet. Also, more dealers specializing in punk and hardcore were around, so perhaps I would have done better than simply break even on the day. Thanks to my friend who watched my table, though, I was able to drift for a little while, do some observation, and take a few photos.

The Beat Swap Meet is setting an example for vinyl fairs in attracting higher numbers of female record lovers.

The Beat Swap Meet is remarkable for a number of reasons. Where most record conventions and vinyl-centric events attract a stereotypically male, white, older demographic, most of the music and vinyl-lovers in attendance this weekend were markedly more diverse in terms of gender, race, and age. Considering the BSM’s attention to underrepresented demographics in vinyl collecting culture, they also did an excellent job ensuring that kids were welcome and (very importantly) occupied. Signs posted around implored people to keep the Beat Swap Meet safe and friendly for children. All over the grounds, kids of all ages and races danced, played, and in my single favorite photo I took all weekend (see below), did arts and crafts. 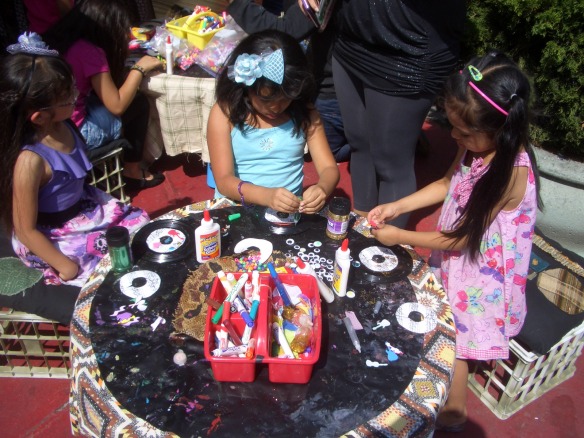 Three girls decorate 7″ records, re-purposing one of the festival’s most sacred items. The two sisters who ran and organized the craft tent rescued these old 7″s (right before somebody threw them all in a dumpster) and found a great use for them.

Needless to say, I’m still recovering from the two days. On my way out the other day, I wound up getting into an argument with an older collector about my thesis topic. (More accurately, he started the argument with me when he saw my research flyers, but let’s not split hairs). He told me I’m “on shaky ground” with my argument and that one would need about 10,000 LPs in his/her collection to be taken seriously, at least from where he stands. I told him I would love for him to take my survey and he said he did not own a computer. Attracting passionate criticism from this individual (who once told me I’d “grow into” Van Morrison’s Astral Weeks; I’m almost 30 and still don’t get it) can only mean one thing: I’m probably doing something right. If the Beat Swap Meet proves anything, it’s that the subcultures that preserved vinyl through its near-death in the late 80’s and early 90’s (dance and hip-hop) have grown back up and aren’t afraid to spread the ownership.

So, Upwards and on-wards. If any of you were at the BSM this weekend, I’d love to hear what you got your hands on and what you thought of the event. sonicgeography [at] gmail.