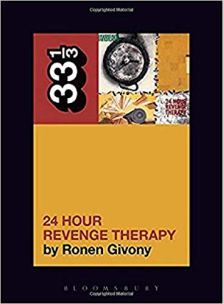 I recently read Ronen Givony’s book on Jawbreaker’s 1994 album 24 Hour Revenge Therapy (Bloomsbury 33 1/3 series), which I highly recommend to anybody interested in the pre-internet circulation of underground music. While it’s so easy to wax poetic and nostalgic about 20th century pop culture, Givony illuminates the dark side of that era. The backlash that Jawbreaker faced for signing to a major label was downright savage. As many of their friends and colleagues have implied, it would likely not have mattered if it had happened five years earlier or later; the conditions in 1995 were just right for righteous indignation among their fans.  The Dismemberment Plan, who I’ve focused a lot of my music writing on, followed a similar early-to-the-party/first-to-leave timeline (though it took Jawbreaker 21 years to reunite, whereas the Plan reunited in earnest within 8).

First, I was genuinely amazed to discover that their bassist Chris Bauermeister went to high school in my hometown. He grew up in a German-speaking household in Connecticut and attended a prep school in Madison that closed down in 1991. I only have vague memories of the school; my mom recently told me she voted in the town’s referendum on whether to purchase the property (with the school building on it). I didn’t have any real overlap with Chris, who graduated and moved away to New York in 1985, the year before my family moved to town. Still, it’s a remarkable coincidence considering how (1) I always considered Jawbreaker to be a quintessential San Francisco band, and (2) I tended to assume nothing cool ever came out of my hometown. It’s taken half a lifetime away, a PhD dissertation, and some sprinkled-in hindsight to realize how wrong I was about that. Also, the youngest person to graduate from Hammonasset is in their mid-forties now.

Second, in the middle of a “get off my lawn” screed about the contemporary state of the music industry, Givony drops an incisive observation that I think bears block-quoting here (emphasis mine):

In the music and media industries today, it is a truth universally acknowledged that a band in possession of a good single must be in want of a fortune. In a time when almost no one still buys albums, and tens of thousands of streams will earn a band pennies, the reasoning goes, artists deserve to get paid any way they can manage, and rightly so. Who are we to blame them if the only people still paying musicians their true worth are corporate advertising and branding companies? It’s a difficult claim with which to argue, which is why almost no one ever still does.

As much as I balked at the assertion that “almost no one still buys albums” (pressing plants wouldn’t be backed up to hell if that were true), this bold statement hit me like a ton of bricks. The idea that musicians can only make a healthy living through licensing (title idea: Better Living through Licensing) has been analyzed comprehensively at this point. Todd in the Shadows broke it down beautifully in this video late last year. However, the specific angle that corporations were the only ones either capable of (or willing to) pay musicians their true worth has been banging around in my head for days. I am steadfast that Google and Spotify have both been instrumental in institutionally and purposefully devaluing music to create a paradox in which artists would be beholden to them. I’m aware that music piracy on the internet long pre-dates either of those companies, and label heads were freaking out over cassette tapes much more in 1987 than they were over MP3.com in 1997 (Thanks, Telecom Act!). Regardless, whether people want to pay for music is not the issue. That so many people feel entitled to not pay for music, or even own it, is noteworthy. Then again, this is nothing new, and people have still not slowed at creating art. Artists, as Marshall McLuhan wrote in 1964, always have the advantage since they are sitting at the point of creation:

In the history of human culture there is no example of a conscious adjustment of the various factors of personal and social life to new extensions except in the puny and peripheral efforts of artists. The artist picks up the message of cultural and technological challenge decades before its transforming impact occurs.

We can’t travel back to the point in time when 24 Hour Revenge Therapy was created, but fortunately the internet has enabled the next best thing: virtual flânerie! Here is some Super-8 footage that Adam Pfahler found of the trio driving around their adopted neighborhood in 1992. Just like Jawbreaker encapsulated the pre-internet era of underground America in their music, this video does well to provide a peek into pre-Google, pre-Facebook San Francisco, when the Mission was cheap and bursting with potential. Also, it gives “Boxcar” the long-overdue music video it deserves.

Checking in from the Bay Area. I’m currently embarked on a massive journey that began in Los Angeles and is ultimately going to wind up in Knoxville, Tennessee. For anyone who loves travel (which is most everyone I know, save for one friend who happens to be a sociologist… go figure*), burning one’s time in front of a computer is hardly a way to make the most of your limited time on the road (or in my case now, rails).

The other morning, an old friend and I were eating breakfast at Eddie’s Cafe in the Lower Haight. She was asking me about my future plans and why I’ve chosen Geography. I was fully prepared to launch into (and bore her with) the usual pretentious diatribe about how big of an umbrella the discipline is, but I immediately just pointed at our surroundings. We were sitting in a soul food diner managed and operated by Korean immigrants. Across the street there was another diner with a Middle-Eastern name, and next door to that lied a fortune telling shop, which has myriad origins but usually traces back to the Roma. And that’s just the beginning.

No matter how many times I visit the Bay Area, I can’t even begin to comprehend how this city came to be, established itself to be the way it is**, and continues evolving in on this bizarre path. How many ex-hippies (and millennial Phish phans) visit the corner of Haight and Ashbury for the first time and are severely disappointed with what they find? I would guess a lot, unless they’re really into overpriced souvenir shops and Ben & Jerry’s (as delicious as many of their flavors are***) for some reason.

Cities need to expand and contract, and the Bay Area doesn’t really allow for these physical manipulations inasmuch as a other cities tend to spread out and become watered down (not naming names, but you can all fill the blanks).

I have to get moving (again), but just to get these on here, hear a few indispensable “San Francisco” songs from over the past few decades****.

Jawbreaker – “Condition: Oakland”
I rode down to the tracks.
Thinking they might sing to me.
But they just stared back.

Stay tuned to hear Jack Kerouac in there.

American Music Club – “All the Lost Souls Welcome You to San Francisco”
The bay’s drunkest and proudest poet laureate who also happened to have a major label record deal at one time, Mark Eitzel, ladies and gentlemen.
“a city built by fire trucks!
dirty old bastards drunk on love
and mean old queens who never forgive
the compromises they made to live”

J Church – “Where the Trains Go”
The late Lance Hahn relocated to SF in the early 90’s, named his new band after the MUNI line he took to practice and work, and proceeded to put out a staggering number of full-lengths, singles, comp songs and splits over the following decade. This is currently my favorite song he wrote during his all-too-brief life.

* = I would say this to her face. Please don’t write me angry emails, sociologists. You’re some of my favorite people. WWMVD? (Max Weber)
** = For a good read on what turned San Francisco from “the post-Gold Rush city in the Bay” into the seat of progressive life in North America, check out Dr. Josh Sides’ book Erotic City: http://www.amazon.com/Erotic-City-Sexual-Revolutions-Francisco/dp/B007PM2ND8
*** = If you work for the corporation and want to give me kickbacks for each hit I get on this article, I eagerly await your $0.35 check.
**** = With apologies to an endless catalog of bands including Operation Ivy, Hickey, Geographer, Moby Grape (see Haight Ashbury circa 1968), Dead Kennedys, Flipper, Crimpshrine, going on forever.

The Matty Luv memorial in Clarion Alley (Thanks to Allie S. for the photo).