Some of you may say, “Tyler, isn’t it a bit late to be running an overview on a conference that ran a few weekends ago?” To which I would reply, “…shut up!” Trinidad was fantastic, I need to ‘immortalize’ it (somewhat) here, and I’ve had some marginally important things going on lately (becoming a PhD Candidate, for one) that have distracted me. That isn’t to say I would not have found something else to distract me, but I feel justified in this case, and you get to look at pretty pictures of beaches and cars driving on the left side of the road, so who loses here? Nobody. Unless you’re from a British-commonwealth country or Japan, in which case… understand the novelty of left-driving autos and Cricket will likely not fade for me anytime soon.

Maracas Bay (not bad on the eyes), on the way to the beach on Day 2.

I landed in Port-of-Spain’s Piarco International (it’d be kind of pointless to have a domestic airport on a tiny island) Airport late on Thursday night, March 3rd. Our conference hotel, the Royal Hotel T&T in San Fernando, sent two of their drivers down to pick up my colleague Sarah and I. Sarah’s flight landed slightly later than mine, and her airline (which shall go unnamed; they’ve already been put on blast elsewhere) saw fit to leave her luggage in Miami, so the first night there was a bit complicated. Regardless, we were grateful to be there,  and a PhD student from Florida State lent Sarah a dress for her paper presentation, so all major disasters were averted. 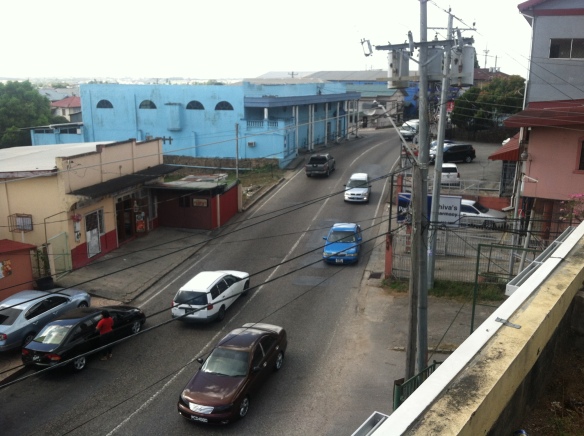 Royal Street, San Fernando. You can’t see Shiva’s Pharmacy in any great detail, but my friend wound up not only finding a suitable replacement for her medication, but spent a sliver of what she would have spent on it in the United States. In retrospect, we shouldn’t have been shocked considering Trinidad’s role within the wider frame of the “global South,” but capitalism is just wacky sometimes.

We headed to the conference center at the Southern Academy of the Performing Arts (SAPA) to catch as much as we could of Day 1 Morning before preparing for our own presentations in the afternoon session. I got to catch a portion of a UNC-Chapel Hill panel on music archiving and preservation (which if you read this blog, you know I’m all about), including Charles B. Anderson’s Master Fake Book of jazz recordings.

Because the conference organizers somehow overlooked a ridiculously nice mall food court down the street from SAPA, they arranged to have some Trini food catered during our lunch break. The highlight of that meal was probably the pepper sauce for our rice, which set our mouths on fire proper. By that, I mean, slamming my hand on the table, eyes-watering mouth-fire. I also became acquainted with Fruta, a soft drink of sorts that has large chunks of fruit floating around in the can. A quick google search informed me that S.M. Jaleel and Company, Fruta’s manufacturer, was actually founded in San Fernando in 1924. I assumed it was some South American product considering the Spanish name and the island’s tight proximity to Venezuela, but it turns out the SMJ targets their products at the English-speaking Caribbean.

I understand this is quite a bit of space on a Geography site to devote to a soft drink, but I wouldn’t be here if I didn’t find Geography in literally everything I encountered. Despite a heavy presence of Spanish on road signs and product names, I don’t recall hearing Spanish spoken once over the weekend. All I heard was heavily-accented English and a couple aural cameos from Trini Patois. My experience in the Caribbean is fairly limited, so I spent the two days there trying to be the best sponge I could for the cultural and gastronomical traditions. Over the past five decades (and much farther back, during the eras of British, French, and Spanish oversight), the country’s predominantly South-Asian and Black populace has been carving a unique identity. With the arguable exception of Long Beach, CA, I had never spent time in a place so diverse. After three years in the relatively monochromatic and culinary-unadventurous Eastern Tennessee, Trinidad was a welcome change of pace, even for just the weekend. 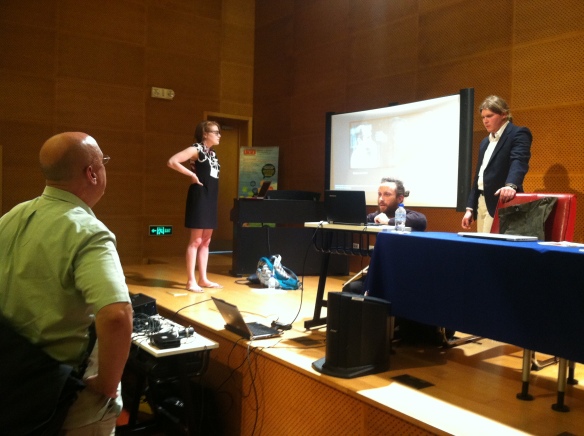 Dr. Les Gay looks on as Sarah, Ben, and Konstantine do a tech-run of their PowerPoints before presentation time.

My presentation ran concurrently with those of my colleagues and friends Sarah, Ben, and Konstantine, so I wasn’t able to watch theirs. By all accounts, though, UT-Knoxville was represented incredibly well between the four of us and Dr. Leslie Gay’s paper on Sonny Rollins’ Caribbean heritage. Sarah presented on woman singers (e.g. Kesha and Nicki Minaj) reclaiming the sound of the female orgasm in popular music, Ben presented on Graham Lambkin and Jason LeScalleets’ soundscape recordings, and Konstantine focused on the East Tennessee soundscapes in the indie film Ain’t It Nowhere. If you’re interested in any of these topics, let me know and I’m glad to connect you to any one of them.

My talk was incredibly well-attended by an enthusiastic audience of multiple age groups and backgrounds. One FSU professor even complimented my choice of playing a Minor Threat clip during my tech-run before the panel began. Ironically, the mp3 of “Straight Edge” did not work during my actual talk, but it was not wholly necessary since about half the room had heard a Minor Threat song before (and reminding me why I love presenting to Musicologists). At any rate, it seemed like my dissertation discussion on the effects of DC Hardcore on the French imaginary of Washington connected well with the attendees. I was grateful to lead off a session that included a student from the University of Maryland who discussed how DC was a veritable melting pot of Latin American musicians. It was a fascinating paper, it made me nostalgic for my days occasionally hitting these Latin-music bars in Adams-Morgan, and most importantly it pointed out “another DC” that was (and still is) every bit as valid. 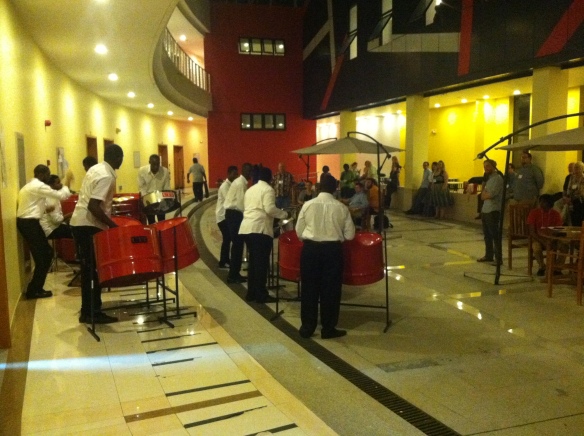 The Southern Academy of Performing Arts Steelpan band opens their set with a Caribbean rendition of “Can’t Take My Eyes Off You.” It was glorious.

That night, we got a wonderful keynote speech from Dr. Hollis Liverpool, known to Calypso fans worldwide as Chalkdust. It was the first keynote I had ever seen that began with a song. As much as I was enjoying it at the time, I had no idea what a big deal Liverpool was. I also had no idea how vilified Calypsonians were for most of the early era of that style. For all intents and purposes, Calypso has a long tradition as black power music, not unlike hip-hop in the U.S. (and increasingly in the rest of the world). [Tangent: The same thing happened around “gangsta” rap in the US in the early 1990s, never mind how overwhelmingly well-read Tupac Shakur was in continuing his mother’s Black Panther tradition. Only a handful of students attend music school in the United States now as rappers or DJs, however, though those numbers are increasing.] To return to my original point, it shouldn’t be surprising how the white governing classes went out of their way to characterize Calypsonians as degenerates and thugs. This led Lord Kitchener and other West Indian Calypso musicians to wear their finest threads when they went to England after The War. Liverpool had one funny anecdote about the time he snapped a photo of Kitch rehearsing in a white t-shirt and got threatened if he published the picture. My favorite moment of the keynote, though (and perhaps the whole conference) was when he played his second song, and invited those who knew it to sing along. All of the Trinidadians, spread throughout the lecture hall, joined in and sang the backing/call-and-response vocals as if they had known this song their whole life. Most of them probably had.

For the reception that night, we got two sets from the pan steel students at the Academy and one from a local Indian music ensemble. I had also discovered earlier that night that the steel pan drum originated in Trinidad, which shouldn’t have surprised me considering how much cross-cultural innovation has happened across those two islands.

My only regret about the SEMSEC 2016 conference was that it couldn’t have stretched any longer. We didn’t get to spend any real time in Port-of-Spain, though the city looked pretty cool from what we saw passing through it) nor over in Tobago, doing some of what I’ve heard is the world’s best snorkeling. But it gave me the motivation to return to the Island(s) in the future to explore these places, drink even more Puncheon Rum and eat my weight in Doubles. I’ll wrap this up with a few more photos from the weekend. Congrats to SEMSEC on following through with what seemed like a pipe dream when they mentioned this plan at the 2014 meeting in Gainesville. Even that long ago, I knew that if I didn’t go, I would regret it, and I’m so thankful I chose to head down.

A neat graveyard I found around the corner from SAPA. 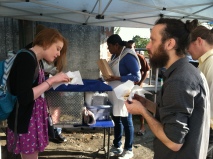 Sarah, Konstantin, and I (behind camera) eat our first Doubles by a gas station on Royal Street while Ben contemplates reality. 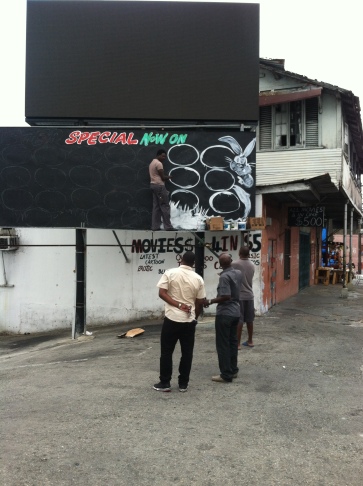 The owner of the shop next to this billboard paints an ad while his friends down below make fun of him.

Now, it’s time for me to turn back around and head to San Francisco for AAG 2016. I’ll be back on here soon with a preview if possible. I will post my schedule at the conference at the very least.