Sorry the video doesn’t allow embedding; I’ve done similarly with a few videos I’ve posted over the years, so I’m not complaining. Go ahead and watch it on Vimeo.

Over the course of my dissertation research, I’ve realized that the day/night binary in the city is largely overlooked in urban geography. Particularly in cities like DC, the population balloons during the day, though the census reflects overnight residents who may or may not take part in much of the city’s nightlife. The “day” population and the “night” population, especially as they increasingly overlap in the age of revanchist urbanism, engage in a tacit conflict over “whose city” it is. This becomes increasingly complicated when quintessentially “night” activity occurs during the daytime. As Straw mentions in this 2010 talk, cities like Winnipeg and others in their corner are embracing traditionally nighttime activities (raves, dance parties, punk shows) and reorienting them to happen during the day, thereby supporting the arts while lightening nighttime disruptions. Punk scenes like that of Washington, DC have been doing this with little to no involvement from the city government for decades. 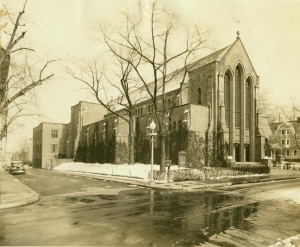 DCist recently posted a 2016 retrospective blog, which included a heated debate between punks and irate young professionals.  The blog PoPville, started by Dan Silverman (aka the “Prince of Petworth”), a legendary neighborhood blogger/flâneur and the veritable face of gentrification in DC, posted an anonymous letter from an irate resident of the Mt. Pleasant neighborhood who was more than slightly annoyed at the noisy music coming from St. Stephen’s. Unsurprisingly, Silverman’s responsible decision to post the email resulted in a firestorm of animated responses. The perpetual verbal tug-o-war between “new” residents and historic participants in underground culture makes for a fascinating read, and I’d love to use this comment chain as an introductory anecdote in a class on Urban Geography of the 21st Century. As obnoxious as the debate gets at times (it is the internet, after all), I’ve seen few better encapsulations of where David Harvey’s “right to the city” sits in the public discourse in 2016.

In the interest of being a professional reporter of this cultural geography, I’ll withhold my own opinions (though you are free to guess based on who I am and what I research, and you can always ask). One comment from a user labeled “harDCore” posted this some ways along in the comment chain:

This may come as a surprise to the NIMBYs on here but DIY music festivals like this are actually a good thing for the community. The church doesn’t do it to make money, they aren’t a for profit company, they do it to help support and be a part of their community. Events based around music like this keep kids off the streets and has them doing something constructive and positive instead of just doing drugs and becoming criminals. The church isn’t selling booze so people aren’t drunkenly disorderly around the event either. There’s less as less places for youth to play music in this city as the property costs keep going up and developers take over (the Union Arts building being turned into a luxury hotel is a good recent example of this). We need local and community art and music in DC, don’t try to push it out. I suggest Googling things like Positive Force DC and getting a better understanding of what a punk concert or festival really means to the community.

And I suppose the armchair lawyers commenting here didn’t realize that the festival had permits for the event, which the police know about, and why they weren’t doing anything if the permits weren’t being violated.

In the end if you want to live in a sterile, art free environment maybe the suburbs are for you.

The attitudes of the so-called NIMBYs continue a long tradition of city property owners who celebrate the arts until said arts create a disruption. Straw’s talk touches upon this, citing the late-19th-century sentiment that lighting up the urban night would eliminate “iniquity,” but instead created new shades (literally) of it. Perhaps some believe that moneyed development is to the late 20th century what artificial light was to the late 19th? Money has unquestionably shifted the “undesirable” elements, but it has not eliminated them, and in some ways, drawn even more attention to them. I find it hard to believe that the irony of the DC Public Library’s well-publicized punk archive would be lost on people committed to their city’s growth but not its history. This also belies Mt. Pleasant’s recent history as a predominantly underclass (and radical) Latin-American enclave, which is an entire other history that could easily compose its own post.

Anyway, I wish I didn’t have to say that there are no correct answers… but there are no correct answers; only correct attitudes. I look forward to following this issue as it continues to unfold, and maybe make it back to DC for Damaged City one of these years. For those of you who can make it (April 6-9…sadly overlapping with AAG in Boston), 2017’s event is going to be a doozy. They’ve got Marked Men!! And Siamese Twins (who I haven’t written about on this site, but every person needs to hear “Don’t Forgive Lightly” before they die).

While on the subject of gentrification, if you have access (or can obtain it) check out the lead article in the new edition of Southeastern Geographer. It’s an outstanding analysis of Knoxville’s place in that conversation, by my colleagues Scott Markley and Dr. Madhuri Sharma. Considering how much I’ve been picking through the complex geographic discussion of 21st century urbanism, this article is already proving inspirational for me. Congrats and great work to Scott and Madhuri.

I write this, regretfully, not in Roanoke, VA at the SEDAAG Meeting. The abstract/registration deadline proved too tight for me after I moved to Tennessee and began working here. Next year! At least I’ve received word from a few of my colleagues who are there and having a great time. Serious respect is due to my colleague Derek Martin, who took home the honors for best PhD paper. I linked that video because he hates it.

Respect is also due to my colleague Matt Cook, who I just discovered drew inspiration from my site to resurrect his. So, I’ll feed the worm of mutual inspiration its tail and use that as inspiration for me to throw a quick update out there. I’ve relayed a number of fun announcements about new books in the works (both involving and not involving my work), but since I’m knee-deep in the end-of-semester crunch time, I don’t have a whole lot of time to contribute a substantial essay to the glut of web content for now. But there are a couple of items you all may enjoy coming in the next few weeks. For now, here are a couple thoughts about Canada.

In case you’re at all interested in underground/punk culture, progressive politics, or just great writing on underrepresented issues, Razorcake is absolutely essential. It’s a non-profit monthly fully dedicated to the universe it covers, and subscriptions are inexpensive and worth every penny. I’m fortunate to have had the opportunity to contribute band interviews to the magazine and their (soon to be overhauled, I think) website in the past few years.

For those of you who have access to it, do try to find the latest issue and have a read of their interview with Steve Adamyk of the Steve Adamyk Band. It’s a simple, straightforward conversation about the restrictions that he and his band face in trying to set up shows south of the border (in the United States). Between the months-long application process and expensive equipment rental and management, to simply play three hours south of his hometown of Ottawa (without risking getting banned for years) has become nearly impossible for a musician of his means.

Over the past few years, I’ve seen bands from the Middle East remove all dates from their websites in order to fly under the radar of the State Department, and I’ve heard singers from the Great White North tell crowds “if anyone asks, we’re here for a bachelor party!” Granted, if you knew the latter band I’m talking about (they’re pretty good), you’d probably question their singer’s ability to say anything serious.

Considering what fertile power-pop music scenes Ottawa, Toronto, and Montreal have grown over the past decade (or for that matter, have had for decades), it’s incredibly disappointing how our government denies us this goodness by leaning on poorly managed and antiquated border laws. I’ll never understand what the United States accomplishes with roadblocks for visiting artists, forcing musicians to construct elaborate lies just to build their fan bases and bring their music to potentially tens of thousands of fans. Fortunately, countries like Germany have been a boon for Adamyk and bands like his, opening their arms to his music (even releasing records for him). Here’s hoping that the network of American fans will, sometime in the near future, be able to show up and shout along with the solid, hardworking Canadian bands that don’t happen to be filling arenas (and asking their fans to play dress up).