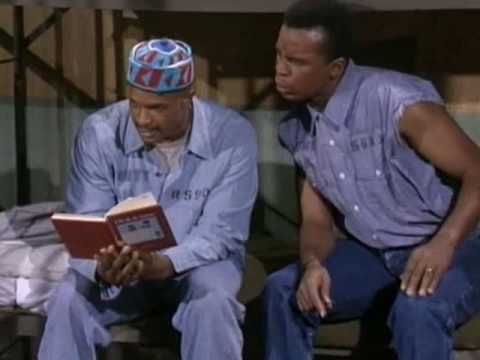 Growing up watching In Living Color spoiled me. For one thing, it made it impossible for me to enjoy MAD TV  when it hit the air in 1995, one year after ILC ended. From what I recall, Saturday Night Live was at its nadir (it had yet to be resurrected by Will Ferrell and Molly Shannon, the latter having appeared in ILC). Like Saturday Night Live before it, the writers of In Living Color leveraged recurring characters to keep viewers invested in the show and to keep writers able to fill weekly half-hour time blocks with limited ideas. Some early-90’s sketch comedy, like The State, lampooned this top-down pressure to use and overuse characters. When FOX first aired MAD TV in 1995, it enjoyed the typical “Wild West” phase of wierdness while it was getting its feet under it (Kato Kaelin featured prominently on the first two episodes), then quickly reverted unapologetically into character-based humor. The problem for me was that, even Will Sasso’s hilarious (though increasingly plot-shredding) Kenny Rogers send-up, none of these recurring characters said anything. They were shameless gimmicks, and their audience devoured it.

To say that I owe most of my pre-college knowledge of African-American culture to the writers and producers of In Living Color (many of whom, I acknowledge, were white) is probably the finest critique of the education I received growing up. I don’t recall any of my teachers discussing the 1992 riots in Los Angeles with my classmates and I, most likely because (1) bringing any kind of radical politics into white suburban classrooms was taboo, (2) they were successfully convinced to sympathize with the LAPD, or (3) they didn’t think it really affected us. We were on the other side of the country and the riots were framed as a “black” issue. To any of my teachers who did mention it in a current events discussion, I apologize, but the longest-lasting allegorical lessons about the riots came via David Alan Grier, Jim Carrey, and their cast-mates.

The greatest strengths of In Living Color, other than the obvious re-elevation of African-American culture within the overwhelmingly white medium of sketch comedy, were the socio-political statements that their recurring characters made. Some, like Lil’ Magic (Kim Wayans), an overzealous little girl from the projects pining for her big break, no matter how humiliating, were sold so well they became sad. Only one or two of the show’s recurring characters (Fire Marshall Bill and Vera DeMilo, both played by Jim Carrey and, like most of the recurring characters, excruciatingly quotable) skirted sociopolitical statements in honor of flat-out absurdist humor. This was important, though, tilling each half-hour episode with eclectic writing and themes. It worked, too, since I’ve seen almost every episode of the show, and I could count on one hand the number of episodes that didn’t have at least one good sketch.

One of the show’s most impressive feats is, considering how long ago it ended and how admittedly-dated some of the humor can come across in 2018, just how prolifically In Living Color has been a gift that’s kept on giving. Throughout my time as a teaching assistant in introductory Geography courses at Long Beach State, I would routinely share particular sketches that remained relevant well into the 2010’s as companions to the lecture topics. “Using sketch comedy to teach cultural geography” could easily become the title of a future journal article, considering how long I’ve been doing it and how much I’ve thought about the idea. I managed to bookend a lecture on minstrelsy in popular culture with two different Tracy Morgan sketches, both of which fit the themes like a glove.

Yesterday, I led a discussion on mass incarceration for my Geography of Human Rights class, and my favorite of the ILC recurring character stable, Oswald Bates (Damon Wayans), came to mind. I didn’t plunge my class down that rabbit hole too far, but I couldn’t shake one particular sketch from my mind. Barbara Bush (Kelly Coffield) pays a visit to some prisoners who have learned to read thanks to her ambitious literacy program. You can watch it below:

The Bates character had already been well established by this season (as evidenced by the crowd cheering at his appearance – a FOX TV hallmark). I’m unsure as to how much freedom Wayans had to ad-lib, but he sold this character beautifully from Season One. Despite how his mouth has gotten him in understandable trouble in recent years, seeing these sketches is a reminder of what a talented performer Wayans was at the time. Only once or twice in my memory did he ever crack, despite spewing increasingly profane (yet still air-able) psychobabble that would put even the most obscurantist academic in stitches. Although I’m sure the show got criticized for taking potshots at erstwhile illiterate prisoners, Oswald always appeared fully in control of his position, and even more remarkably, he was actually understandable. Here is one of my favorite Oswald Bates moments, where he applies for parole and the incongruity of his reading comprehension forms a graceful punchline in the middle:

Oswald Bates spoke to one great contradiction within our prison system: the liberal appeal to humanitarian treatment (which is good) without addressing the factors that put him in prison. They addressed a few facets of his past, including that he has a son who is just as confused as him. He is also clearly the product of a sub-par literacy program; he reads at a post-graduate level (albeit, sex-ed pamphlets and such) but has no context for what any of it means.

Did I immediately recognize all of the layers as to why this was so funny when I first saw it over twenty years ago?  Of course not. I did, however, understand the message almost immediately, and even more impressive on the part of Wayans and the writers, they still make me laugh today and continuously pop into my head when discussing topics as serious and bleak as mass incarceration. Considering how often American film and television go to lengths to romanticize (and in doing so, trivialize) prison and prisoners, Oswald Bates and the In Living Color producers contributed to the conversation about their underlying humanity and ambition. Most of their recurring characters did.