You are currently reading part three, and I am elated. Last week, I got on the phone with David Gardner of the Gadsden County Chamber of Commerce, and after we hung up, we felt like we’d known one another for years. As it turned out, Gardner used to work for Visit Florida, and we shared a deep appreciation for American Jewish culture and these histories that reside on the fringes of the twenty-first century.

Perhaps as importantly, Gardner did have some material to share about the Hotel Quincy, including an April 1972 feature about Mrs. Frank W. Lloyd from the Tallahassee Democrat. Her family had owned the hotel from 1928 until 1951 (as I’d found in that 1951 Democrat blurb in Part 1), and she lamented how the development of the Interstate pulled traffic away from Quincy in the 1950’s. The article (which has no visible byline) also confirms it: the hotel was demolished circa 1962.

It also turns out that, yes, my guesstimate of where the lobby once stood in Part 2 was accurate. Here was my photo recreation:

Here is another photo postcard depicting the outside of the Hotel Quincy, published in 1940, two years after Irving mailed that postcard above:

It’s apparent that the new owners, who bought the place in 1951, got rid of the Plantation-style stacked front porch (but not the rocking chairs) and repainted it to make it match the white-washed Modernist architecture that was in vogue down in Miami. It’s odd, since Quincy has always presented itself as quintessentially “Southern,” which tended to define itself against whatever happened below Gainesville.

Zherti Jasa, a former student and future star architect, put it into a helpful perspective.

“I don’t know if there’s a specific reason why people stopped designing the stacked porches like in the hotel,” she said, “but I would think that the facade is what became more prevalent. Simplicity was the name of the game. They were trying to get away from any decorative ornamentation that resembled any European classical or Roman styles and so on and so forth. The architectural styles typically represent a political and cultural movement of that time.”

So, there we have it. I’m hardly done thinking about or seeking new information about the Hotel Quincy, but as I said, I’m elated how much I was able to unlock using those twentieth-century methods of phone, email, and just stopping through. I still think it’s strange how there aren’t more publicly accessible resources about a building that formed such a heart of what was, in its time, a cosmopolitan town.

Thanks again to David and Zherti for their help in putting the mystery of the panhandle to bed. And thanks to you for reading this.

If you would like to catch up first, read Part 1 of this 2-Part Entry in the Ben Irving Postcard Project here.

Quincy, Florida is a small town not too far Northeast of the state capital Tallahassee (separate, dedicated entry on Tally coming in the future). A YouTube search, which I’ll admit I did not think to do when researching before my visit last week, turned up a few brief videos focusing on the newer hotels on the outskirts of downtown. One video was submitted to HGTV and included testimonials from a diverse set of local residents, including the owner of the Alison House Inn. Like the other functioning B&B’s in town, it was built as a private home, and I have no indication it was ever a hotel. Another video features barely-edited footage of walking and driving around the town set to what I assume is a royalty-free soundtrack. It’s pleasant, but not too informative.

Late last month, as promised, I took a diversion on a multi-state drive to go check Quincy out. I managed to sneak into town before 5pm, so there were still some people out and about. I parked near the intersection of Jefferson and Duval, but I saw no historical markers (at first) or buildings easily accessible to the public – only the police station and a pair of B&B’s. I decided to take a walk over to the town square’s Federal Courthouse Building, two blocks away.

After encircling the building, I found the ground-level public entrance. The security guard on duty seemed like he had a good base of local knowledge, so I showed him the 1936 postcard. I told him that I read that the Hotel had been located on the corner of Jefferson and Duval. He replied, “Yes… that hardware store’s parking lot is where the hotel was located.” I left him my information and walked back over to where I’d parked my car next to the Bell & Bates Home Center.

Given my limited resources at the moment, nor immediate access to anybody old enough to clearly remember the hotel, I decided to take the security guard on his word. I stuck the postcard and my camera through the fencing and took this picture:

Looking at it again, I wonder: Are those pillars and slats supposed to be an homage to the vanished hotel building’s lobby pillars? They don’t appear to serve any clear purpose for the garden center. Was the main entrance on Jefferson Street, or was it on Duval Street? If it was the former, then I had this repeat-photo staged (mostly) accurately. If not, then I still came close enough. I turned around and looked back across the street, and I took this picture: 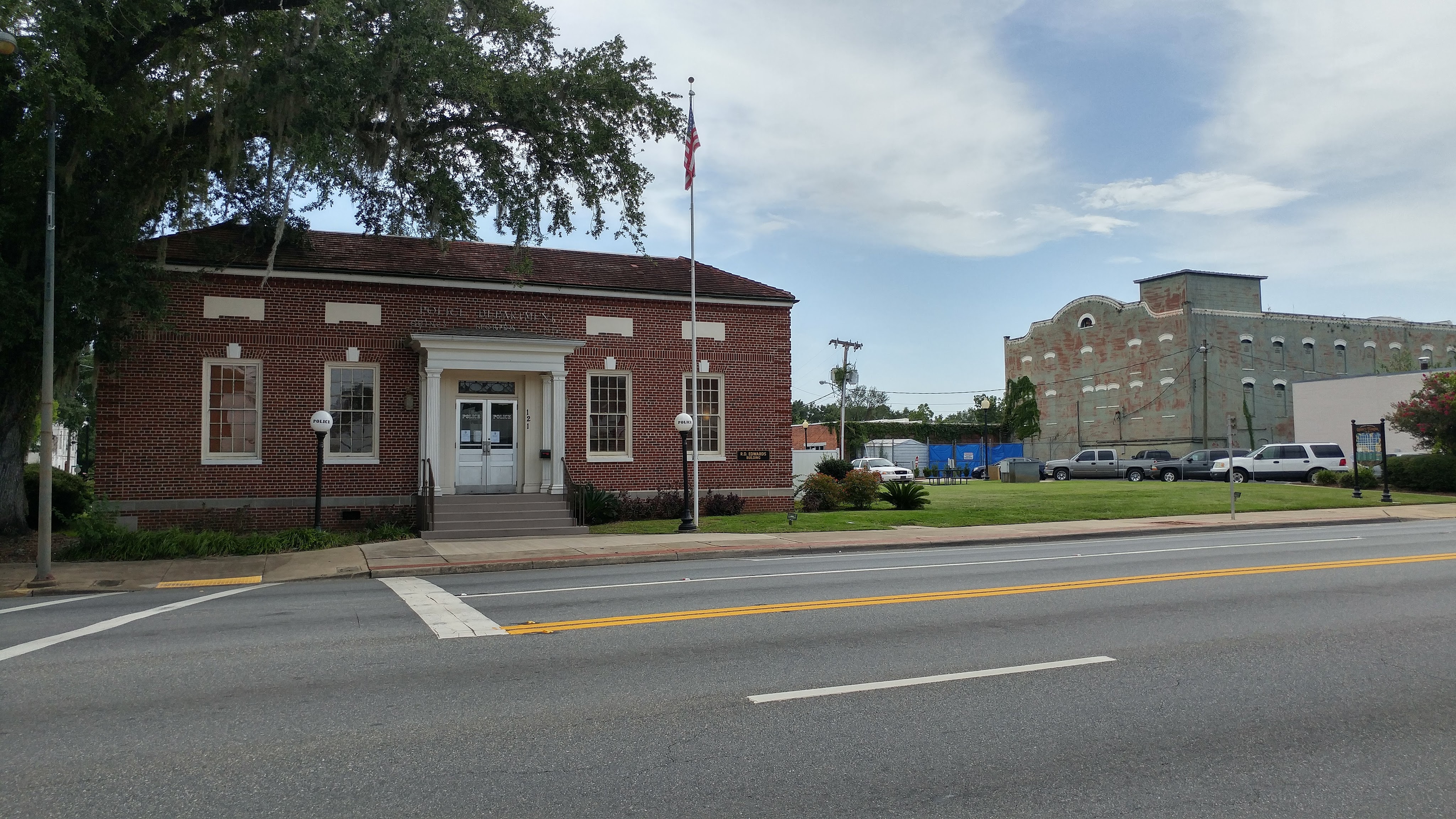 As I believe I mentioned in Quincy Part I, it wasn’t out of the realm of possibility that the Police Station was located in the building that had once been the Hotel Quincy. The historic placard (which you can see on the right side of this photo, standing on the grass) had another story about the building’s history, indicating that it used to be the Post Office where Ben Irving may have dropped his postcard off on January 29, 1936.

I will keep digging, but I still have not been able to find any clear references to the Hotel Quincy coming down. This very charming walking tour guide only mentions the Pat Munroe House (seen below) opposite that parking lot. I wonder if the building fell into such disrepair that it was a non-story when it did happen, a pile of rubble that needed to be cleared for that parking lot on the edge of downtown. 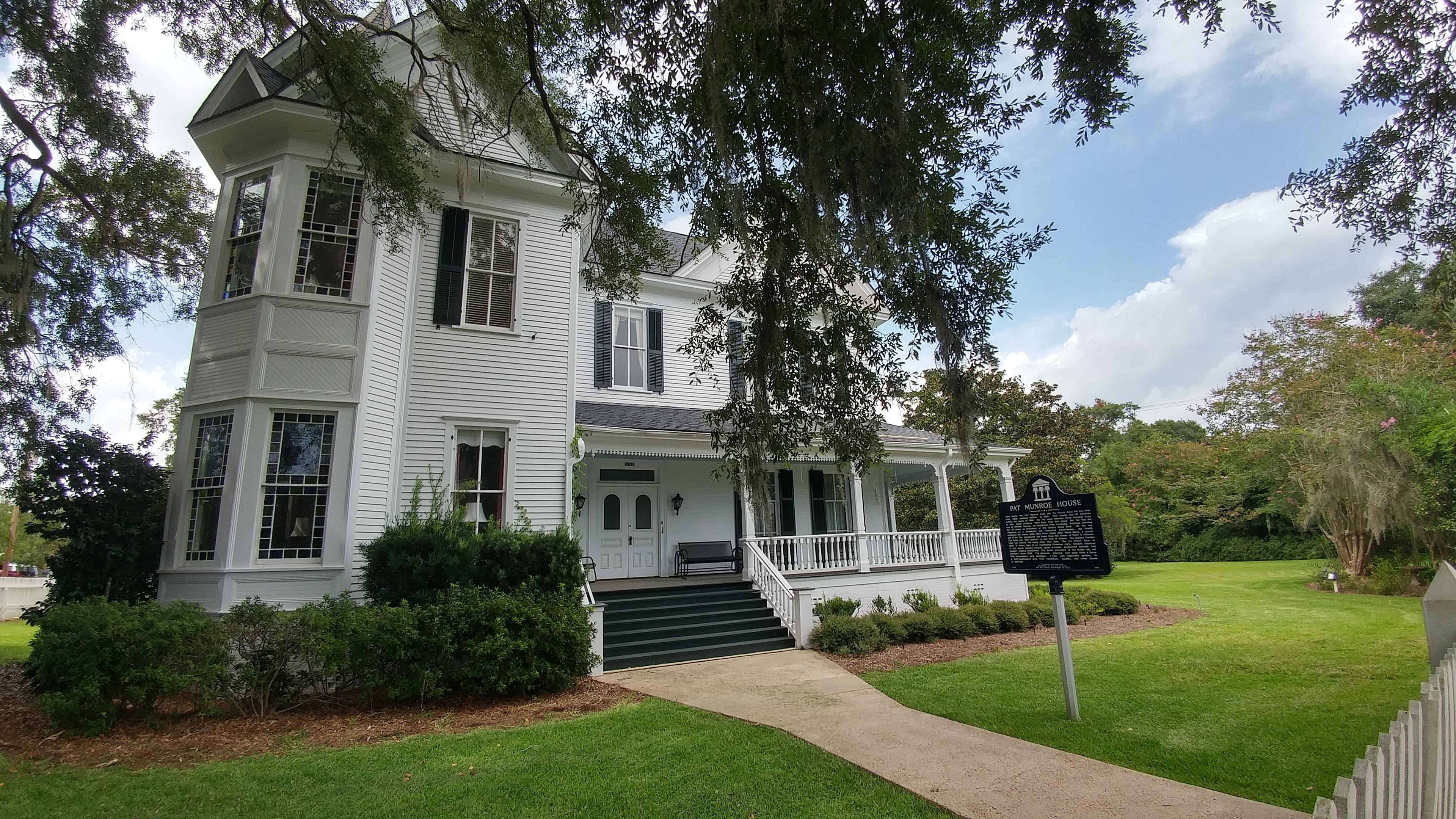 So, per usual, ground-truthing brought net-positive results: I got to visit (however briefly) another charming small town, and I got a verbal testimonial that answered my original question. I believe a phone call to the local Chamber of Commerce may be in order, and I’ll post any updates to this entry below.

The greatest byproducts of my research on Quincy, however, have been the discovery of the “Quincy Five” and Marston C. “Bob” Leonard’s Florida History Internet Center website. The Q5 were five young Black men who were convicted of the 1970 murder of a regional deputy Sheriff but were later exonerated from death row (the first incident of such in US history). What an amazing story, and I’m disappointed (though not surprised) I’ve never been taught about it.  As for the Florida History website, Bob Leonard founded it in 1998. By the looks of it, it has not been updated since then, which is incredible. Crack open a bottle of Surge, throw on that scratched up New Radicals CD, and feast your eyes on this. You’re welcome.