From what I understand, Chicago developed its nickname “The Windy City” from it’s reputation of spurious, silver-tongued politicians ‘blowing wind’ for their constituents, so to speak. Of course, people still largely take the nickname literally, because Chicago is windy, and if you’re there at the right time of year, so, so icey. It’s like sticking your face in a freezer that Frigidaire recalled for being TOO COLD.

For this reason, on top of dozens of others I could list at a moment’s notice, I absolutely love Chicago. Like most of the Midwest, the unforgiving cold keeps the dilettantes away, which is fine. More rare vinyl, delicious Polish food and deep-dish cheesy-tomato pie (they call it “pizza,” which isn’t accurate, but I’ll allow it) for me. Until late last year, I had never been to Chicago during the cold season; I’d visited a few times during the summer, and once for a typically memorable AAG meeting in April 2015.

Until last week, however, I hadn’t gone to Chicago with any of the Ben Irving Postcards. At least, I hadn’t made any excursions to find the places they depicted. Before my train left Union Station to head back to Lansing, I had time to make two stops, which I had planned meticulously to lead me back to the Loop. The first was a stop-off in Uptown and the second was located downtown, tucked right inside the loop track on Wabash Ave.

In a few recent cases, I’ve lucked into staging repeat postcard photos miraculously close to the anniversary of the date which Irving mailed them. This was not one of those cases. He mailed this one (above) on the evening of July 13, 1942, commenting that he was “sweating like [he] were in a shower.” That’s rich, considering how my right hand went numb to get this photo. Don’t ever say I don’t make sacrifices for my art.

Like many of the hotels featured in the Ben Irving archive, the Sheridan transformed into private residences. It shut down as a hotel in 1974 after over 50 years of operation and became private residences by 1983. A decade ago, the Horizon Realty group bought the building for $10 Million and started refurbishing it back to “its Jazz Age luster,” as Chicago Magazine wrote. The Terra Cotta sculptures were cracking and falling off the building over the course of the prior ten years. I can’t find any direct sources on what happened to the residents when the bank foreclosed on it, but it probably wasn’t pretty. Oddly, the Jazz Age Chicago WP site never got around to elegizing the building.

EDIT: I did find this site, which gives a bit more detail into the building’s history and situation as an anchor of sorts in the Uptown district.

Because there isn’t much detailed information on the Hotel (at least, which I’ve been able to find in the limited time I have to write this), I have no idea what those pillar-like objects are on top of the postcard illustration. They don’t look like Terra Cotta designs. Either way, they’re gone today, along with those two gigantic apocryphal flags that the artist probably added, along with their inventive perspective on the building. It does appear that, even in 1942, most of the street-level spaces were commercial enterprises, with an awning leading guests into the hotel on the Wilson Avenue side. The sidewalk is also noticeably bigger (much bigger) in the artistic rendering than in modern reality, though that could also just be artistic license, too. Gone are the light posts and moved are the sidewalk trees (which, granted, were frequently fudged by illustrators to gussy up a street scene for tourist postcards). The second-story window awnings have also gone from a lime green to a navy blue – likely a combination of Horizon Realty’s branding and how it’s just a better color. If you’re looking for a place and can afford about $1,500 per month, they’ve got plenty of openings!

Given how vocal I’ve been about the privatization of so many places and spaces featured on antique postcards, it was a welcome relief how open the staff at the Palmer House Hotel keep their crown jewel: the Empire Room.

The Palmer House, being situated right inside the Loop, claims to be the oldest continuously operating hotel in North America. Apparently, the original iteration of the hotel opened on September 26, 1871… and then burned down along with most of the city less than two weeks later. Wow.

I walked into the hotel lobby. Maybe it was just poor eye-timing mixed with pessimistic paranoia, but I felt like I got suspicious stares from the hosts in the fancy lobby restaurant. However, after asking a few questions to a concierge around the corner, he told me “oh, the Empire room! Yeah, if there’s nothing going on in there, then you should just be able to walk in, up the stairs on the opposite side of the lobby.” 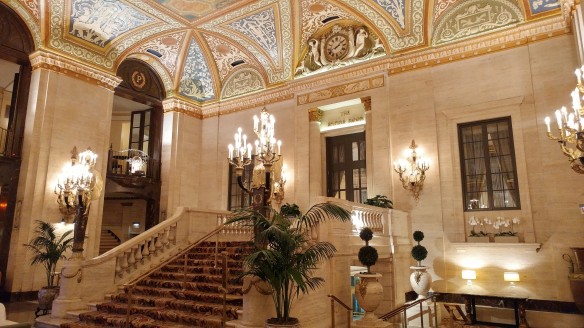 I felt a bit of anxiety walking up the steps, almost as if everyone in the lobby momentarily turned to glance at me. I opened the doors, and there it was.

What a beautiful room. For a brief moment, I felt as if I’d been transported back to 1950, or at least the ending of The Shining.

Here are the postcard image, and 2019 photo juxtaposed:

The ceiling design, chandeliers, even adornment above the curtains were immaculately maintained. I highly doubt those are the same curtains behind the stage, but they kept the color scheme and general aesthetic the same, too. The obvious changes were as straightforward as they were understandable: the dance floor carpeted over, a higher stage, and the bandstand replaced with a conference table. Also, the 2019 chairs looked comfier than the wartime ones. I have no idea how they got that tuba to levitate back then; I guess WWII was just a strange time.

I realize that the Palmer House postdate (1950) falls outside the time span I advertised on the Instagram (1932-1944), but there are going to be a small handful of outliers. Also, if literally one person cares, I’ll be amazed. Either way, I don’t know why Irving was in Chicago in 1950; all he indicated was that he was going to be there until that Thursday, having mailed the postcard on a Sunday. I had also completely forgotten that the USPS postmarked and shipped stuff on Sundays back then. In fact, this was a few short months after the USPS reduced their deliveries to one per day:

On April 17, 1950, “in the interest of economy,” Postmaster General Jesse M. Donaldson ordered postmasters to limit the number of deliveries in residential sections to one each day. The only change made in business districts in 1950 was that the number of Saturday deliveries would be one fewer than the standard number of weekday deliveries (USPS.com).

Have a great Thanksgiving, everybody! Check back here soon for more high-quality content (by my standards).