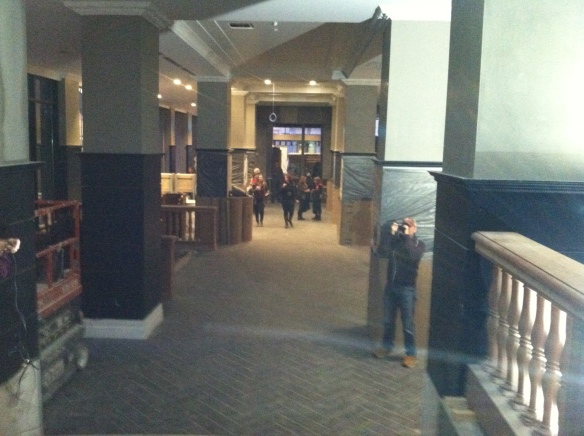 A little over a year ago, I joined Knox Heritage so I could attend an open house of the under-extreme-renovation-at-the-time Farragut Hotel building in downtown Knoxville. I hadn’t been able to track down any of the hotel’s official records from 1938 and 1940, the two occasions I have evidence to believe that Ben Irving stayed there. The work that the contractors and development company had been doing, even at that point, was pretty astounding.

A few Fridays back, many of us had the rare opportunity to do another walk-through. It was impressive how much progress had been made. One of my favorite points that owner Rick Dover mentioned was that, although they were building a full kitchen for a morning breakfast buffet, the new Farragut would not have an in-house restaurant. There are too many great restaurants within walking distance, and they were encouraging guests to actually get to know the city around the hotel – a sentiment I can get behind. Here are some photos from the visit. 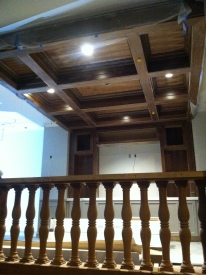 The beautiful wood finishing on a nook next to the Clinch Ave. entrance that’s going to be a library. 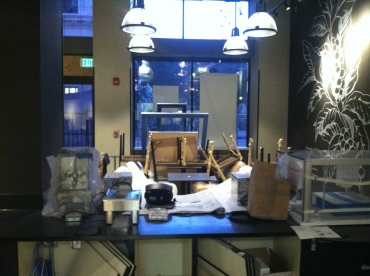 “Better make it quick, kiddo; in 5 minutes, this place is becoming a Starbucks” – Unfunny sarcastic character from the last good season of The Simpsons. 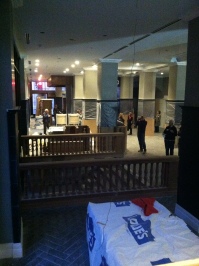 The lobby, taken standing over the original stairs down to the Clinch Ave entrance.

What I can only assume will be the Men’s Room once they install the urinals. The tile floor and dark green stall doors (nice touch) reminds me a lot of New Haven Pizza places from growing up. 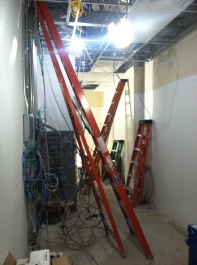 The building’s official re-opening as the Hyatt Place at the Historic Farragut Hotel is slated to be weeks away, which means that workers are scrambling to get all the holes filled and everything else in working order as I type this. The Knoxville News-Sentinel interviewed the new General Manager (who moved his family from Austin to come and run the show) and gave a pretty good bullet-point history of the building on their site here.